Exploring The Capitol Reef Region
The Capitol Reef region of Utah, spread out over the center of the state, offers a breadth of activities as wide as the vistas painted against every horizon. Travelers looking to find some solitude, even during peak season, will be rewarded for their decision to pull off the interstate and explore spaces between the beaten paths.

Capitol Reef National Park is defined by The Waterpocket Fold, a 100-mile wrinkle in the Earth’s crust that runs all the way from Thousand Lake Mountain in the northwest corner of the park to Lake Powell on the Arizona border. This geological feature has lifted the western portion of the fold over 7,000 feet above the eastern side, offering visitors stunning overlooks, carved over eons and stretching for miles.

Capitol Reef is an official International Dark Sky Park. The park and the surrounding areas are home to some of the darkest skies in the world. Clear, cold nights offer up incredible views of the Milky Way Galaxy, so it’s worth setting an alarm in the dead of night to peek out your tent or hotel window to marvel in the cosmos.

There’s more to Capitol Reef than stellar views and ancient sandstone. Throughout the region are opportunities to get a glimpse at what life was like way back when, as well as get a greater understanding of our impact on the world around us. From abandoned Mormon outposts in the heart of the national park, to unearthed Fremont Indian villages and petroglyphs, the history of this region of Utah is as much human as it is geologic.

Despite its seemingly remote location, the Capitol Reef region still boasts plenty of amenities. From luxury resorts in Torrey, to well-maintained campgrounds at nearly every stop, you’ll be able to explore the rough-hewn landscape without having to rough it yourself. 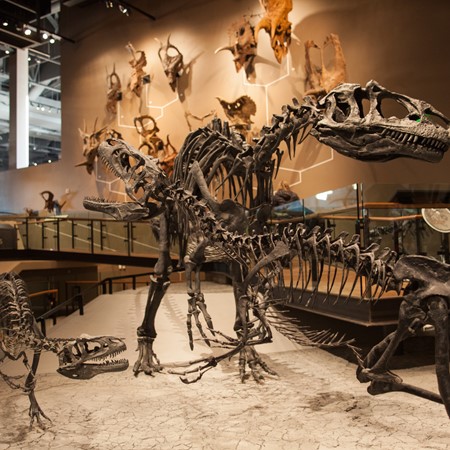 Below are a few stories and ideas to introduce you to Utah's capital city and flesh out your itinerary, whether you stay in the city or explore its backyard mountains. For this itinerary, a trip to the Natural History Museum of Utah is a must, whether or not you're traveling with kids. There's a reason why it's known as the "trailhead to Utah." First-time visitors might include a trip to Temple Square. The spiritual center for The Church of Jesus Christ of Latter-day Saints, Temple Square offers free walking tours of the Temple grounds and frequent performances by the Mormon Tabernacle Choir.

Oh, and here's a pro tip: As you're navigating the city (walking, bike share, taxi, Uber, Lyft, public transit or car), if you know that part of Temple Square is essentially (0,0) on the grid, each street heading north or south adds 100 and each street heading east or west adds 100. Thus, nine blocks south and nine blocks east you'll be at 900 South and 900 East, locally known as 9th and 9th. (Read about more Salt Lake City neighborhoods and browse accommodations here.)

It's about two hours to Helper, so an overnight in either Salt Lake City or Helper is appropriate, depending on how long you spend in the city. 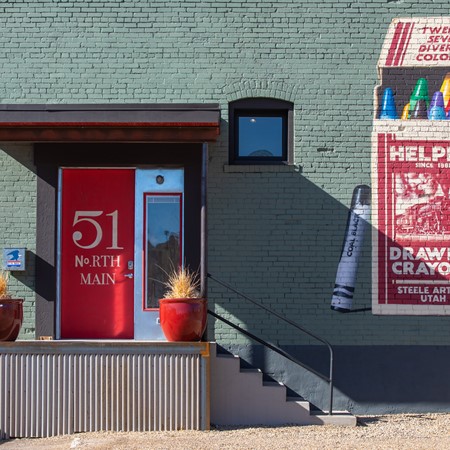 Spend the first day on your way to Capitol Reef National Park digging deep into a sampling of natural — and human — history. Start your morning by grabbing a coffee and taking a walking tour of a Helper, a former coal mining town that’s recently developed a vibrant, eclectic art scene.

A short drive south of Helper brings you to the densest concentration of Jurassic-era fossils anywhere on Earth at the Jurassic National Monument. You can meet and watch paleontologists at this working dinosaur quarry while you stand in the shadow of the fossils of the predators who met their fate in this spot millions of years ago.

Finish the day exploring the San Rafael Swell. Bring your mountain bikes and ride (or drive) the Wedge Overlook Trail, a 12 mile out-and-back gravel road along the canyon rim. Arrive at the Wedge Overlook and peer down into what’s affectionately called the “Little Grand Canyon.” Looking 1,200 feet down, you’ll realize there’s nothing “little” about it.

Where to Stay
Bring your camping gear (and plenty of water) to camp near the Buckhorn Draw, or travel west to Castle Dale to spend the night. 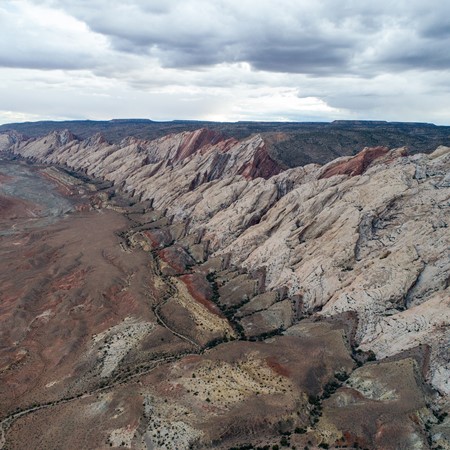 Day two of your Capitol Reef journey brings you even deeper into the heart of dark sky country. In the Capitol Reef region, noise and light pollution levels are some of the lowest found in the country. While exploring, you might find yourself stopping often to take in the overwhelming quiet of your surroundings.

The day’s big feature is Goblin Valley State Park. The thousands of towering, delicate hoodoos call to mind the ancient seabed of an alien planet, and the park’s remote location only adds to that reputation. Step carefully, though, though these hoodoos have stood the test of time, they are remarkably fragile. This is also your first chance to try out a canyon adventure; five miles west of the park lies Little Wild Horse Canyon, a perfect slot canyon for families to explore and get a taste of canyoneering (without ropes required). Once you return to Earth, it’s time to dip your toes into Capitol Reef National Park, exploring the northern edge of the park on the way to Torrey for dinner and rest before a big day tomorrow.

Where to Stay
Torrey, in one of their hotels, or in the Conestoga Wagons at Capitol Reef Resort, luxury covered wagons that would make early settlers green with envy. 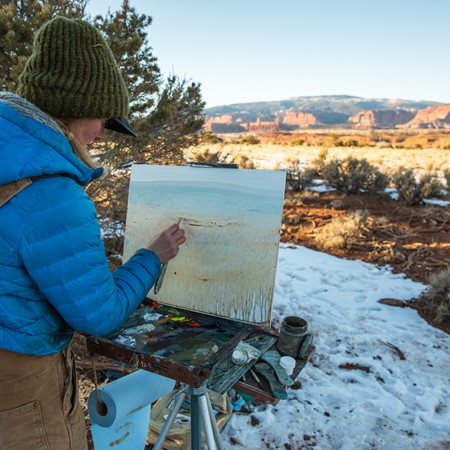 Lace up your boots and hit the trail. Day three is all about getting up close and personal with Capitol Reef National Park’s iconic domes and natural bridges. Though you’ll be hiking between 6,000 and 9,000 feet above sea level, you’ve had a few days to acclimate to the elevation, letting you keep your head up to focus on the magnificent views, and not with your hands on your knees catching your breath.

The Hickman Bridge natural sandstone arch is an easy way to start checking off the “must-do’s” within Capitol Reef. This two mile hike that begins right on the shoulder of Route 24 gives the entire family the chance to scramble between ancient volcanic boulders on your way around the 133-ft. tall sandstone arch.

Late-summer visitors can enjoy a treat that’s unavailable the rest of the year; fresh fruit, picked directly from the Fruita U-Pick orchards. Cool off in the shade of a peach tree and fuel up on the freshest fruit for miles in any direction.

Tips for Prepared Travelers
- Expert Tips for Your Next Canyoneering Adventure 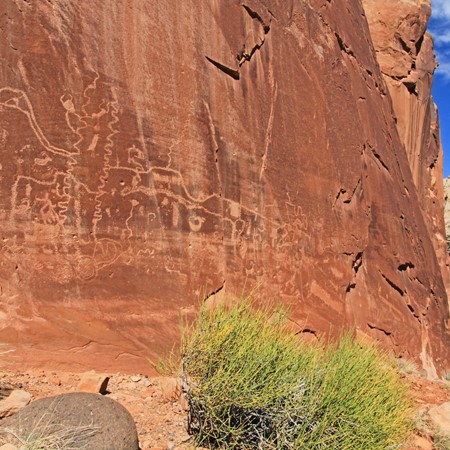 It’s time to put Capitol Reef National Park in the rearview mirror, but not without first basking in the astonishing petroglyph figures carved by the Fremont people over 1,000 years ago. This is just a taste of the art and culture you’ll experience today. Later on at Fremont Indian State Park, you'll see artifacts, pottery and arrowheads in the park’s museum. You’ll also be treated to even more stunning art painted and carved into different sites around the park.

In-between these two archaeological sites, you can spend the bulk of your day at Fish Lake, home to legendary fishing spots, as well as Utah’s oldest living resident, Pando. A massive grove of 40,000 quaking aspen trees connected by a single root system, Pando is estimated to be over 80,000 years old, though he doesn’t look a day over 70,000. It’s a remarkable display of the unique biodiversity that’s taken root in this region.

Where to Stay
Pitch a tent or park your RV at the Castle Rock Campground near Fremont Indian State Park.

Extend Your Stay
Can’t get enough of the Capitol Reef region? Check out the ATV Paiute Trail to see a side of the region few get to experience. This 275-mile long loop is consistently rated one of the best trails in the country. Or, instead of visiting Fremont Indian State Park on Day 4, drive south from Torrey through Escalante and explore the Bryce Canyon region.