Utah has a rich catalog of beautiful and historic buildings, each telling the unique story of its former inhabitants (Read: Utah Heritage Hot Spots). But for history buffs and architecture lovers, few buildings can rival the drama and lore of old picture palaces and opera houses.

And with many historic theaters across Northern Utah experiencing a revival and repurpose in recent years, visitors hoping to catch a show and a glimpse of years gone by won’t want to miss these locales.

The Caine Lyric Theatre home to the Lyric Repertory Company in Logan, is considered the “Crown Jewel of Center Street.” Once a thriving theater and opera house, the Caine Lyric is now run by Utah State University, which puts on a vibrant summer series of plays in the space, ranging from dramas to comedies and musicals, and everything in between. (Read: Training Pigeons and the Odd Jobs of Artistic Direction)

Like many old theaters in Northern Utah, the Caine Lyric fell onto hard times after World War II, seeing a decline in visitation, even briefly being used as a warehouse space before it was considered for demolition. Now, after extensive modern renovations, the theater seats 374 guests and still features a proscenium arch with a coat-of-arms from countries including England, Holland, Denmark, Spain and Germany. If you look closely, you can see where an angry theater guest took an ax to the German portion of the coat of arms during World War II.

Local legend says the Caine Lyric Theatre is haunted. The story goes that the ghost, named “Everett,” was playing Gravedigger #2 in a performance of “Hamlet,” when the first gravedigger became jealous because Everett got more laughs. Legend says that after getting more laughs, Everett didn’t show up for subsequent performances, but the first gravedigger suspiciously had a fresh prop skull during his scene. Now, locals say Everett’s ghost slinks along at night on the catwalks of the theater, sometimes calling out to actors as they rehearse. (Read: Ghost Towns in Utah)

Home to the Lyric Repertory Company in Logan, the Caine Lyric Theatre is considered the “Crown Jewel of Center Street.”

Formerly known as the Capitol Theatre, the Ellen Eccles Theatre in Logan was originally a vaudeville and opera house that welcomed well-known acts such as Abbott and Costello, the Marx Brothers and George Burns and Gracie Allen. As the years went on, it became a movie theater and community event space. But after falling into disrepair in the 1980s, residents in the community feared it would be demolished and turned into a parking lot.

Thanks to preservation-minded residents of Logan, the theater was saved from destruction in 1989, when the Capitol Arts Alliance was founded to oversee the renovation of the theater (Read: High Art & Hometown Americana). Since then, the Capitol Arts Alliance has become The Cache Valley Center for the Arts, and hundreds of volunteers have dedicated countless hours to restoring the Ellen Eccles Theatre to its Capitol Theatre glory days, officially reopening the doors in 1993.

The theater has solidified itself as a staple of the Logan community, which prides itself on the wide variety of arts and entertainment events they offer (Read: A Local’s Guide to Logan). Whether you’re visiting for a quick tour or for a local performance, you’ll be able to see the tireless work The Cache Valley Center for the Arts has done to preserve the space. Like the original hand-painted phoenix murals that have been carefully preserved in its auditorium, the Ellen Eccles Theatre is an inspiring example of a community coming together to give a building new life, allowing it to rise from the ashes of its past.

"Like the original hand-painted phoenix murals that have been carefully preserved in its auditorium, the Ellen Eccles Theatre is an inspiring example of a community coming together to give a building new life, allowing it to rise from the ashes of its past."

Its facade bordered by two ornate columns and decorated with Egyptian statues and hieroglyphics, Peery’s welcomes visitors to the golden era of moviegoing. Its box office, which still stands today, is straight out of a time capsule — you can almost see the 1930s theatergoers lined up for tickets.

Step into the auditorium of the theater and you’ll be greeted with more elaborate architectural stylings along the walls and around the stage (Read: Art Deco in Motion: Ogden’s Creative Remodel). The whole auditorium room was built to represent a temple court in Egypt, with a dome ceiling decorated to represent a desert sky. The theater is one of few left of its kind in the United States that has its "atmospheric ceiling” still intact. When the show begins, watch the daytime lighting change to dusk, and then a starry night sky appears over head.

The Empress Theatre is a shining example of what small-town theaters use to be, and how they continue to serve their community in the modern era.

Built in 1916 on Main Street in Magna, Utah — just west of Salt Lake City — the Empress Theatre stands out with its neo-classical architecture. The front facade of the building is impressive, with ornate Beaux-Arts architectural style trim lining the entry to the lobby, framed by colorful bricks stacked in intricate patterns. Above the facade, surrounded by intricately carved rosettes, the word “Empress” stands out in old-style signage, designed before the days of neon lights and screens.

A staple of the Magna community, who saw a boom in copper production in the early 1900s, the Empress Theatre has remained a staple of Magna’s Main Street over the years. After being designated a National Historic Place in 1985, a group of community volunteers came together to operate the theater.

Stop by the Empress Theater for a community production and step into Magna’s history. Having put on over 116 productions since 2006, the volunteer staff are committed to keeping the Empress’s doors open and the arts alive in the northwest corner of the Salt Lake Valley.

"The Empress Theatre is a shining example of what small-town theaters use to be, and how they continue to serve their community in the modern era."

Visit the Capitol Theatre in downtown Salt Lake City, and take a step back in time with architecture mimicking buildings of the Italian Renaissance. Originally built in 1913 as the Orpheum Theatre, the theater housed some of the city’s most lively vaudeville performances. Now, it’s home to Utah’s most prestigious performance groups like Ballet West, Utah Opera and the Children’s Dance Theater.

When visiting the Salt Lake area, be sure to check the Capitol Theatre calendar and catch a performance while you’re in town. While the outside of the building is ornate and eye-catching, the true beauty lies inside the auditorium. In 1979, Salt Lake County conducted extensive renovations of the theater, restoring it to its original look and feel.

Enter the sprawling, two-level auditorium and you’ll be greeted by a massive chandelier that fills almost the entire ceiling with hundreds of sparkling lights. Trace the original brass and wooden railings with your finger that were restored with care during a recent renovation, or walk the lobby, taking in the intricate glass and Italian tile designs on the walls and floors. No matter what brings you to the Capitol Theatre, you’ll quickly see why it’s one of the premier performing arts spaces in the state of Utah. 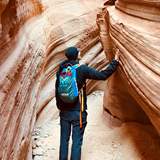 About the Author – Taylor Hartman

Taylor Hartman is the global content and tour specialist for the Utah Office of Tourism. His award-winning journalism has appeared in The Salt Lake Tribune, Salt Lake City Weekly, SLUG Magazine and the Utah Investigative Journalism Project. Taylor enjoys peering under rocks and behind closed doors for stories, shining a light on parts of life that are otherwise unseen.