Nourished by the Land: A Shoshone Perspective

Darren Parry learned from his grandmother about the plants, places and worldview that sustained their Shoshone ancestors.

As a child, Darren Parry would often find himself climbing into his grandma’s aging Oldsmobile so she could take him out foraging. After winding up canyons in Northern Utah’s Cache Valley, they’d find a spot near a stream to park. The first thing Darren’s grandmother, Mae Timbimboo Parry, would do when they got out of the car was say a prayer, thanking the Creator for the plants they were seeking. Then she’d take out a woven willow basket, stained purple from past trips, and they’d gather.

Mae and Darren might find flowers such as blue camus, whose bulbs they boiled to a texture like pasta and used to add body to soups. Another flower, bitterroot, can be steeped into tea and used as a medicine or, when ripe, has seeds that can be ground into meal. In June, Mae and Darren would gather purple-blue serviceberries for eating or drying. In July and August, it was time for Darren’s favorite: chokecherries. Raw, they’d often taste bitter, so Mae and Darren saved the chokecherries to cook and sweeten for making jam or syrup or a thick traditional drink called gotesup. “By far, chokecherry syrup is the best thing you’ve ever had,” Darren says.

Mae was never one to rush a trip. “She would always pick the berries with such care that she wouldn’t even harm a leaf on the tree,” Darren remembers. And she never picked all the ripe berries on a plant. “You would have a cluster of ten, and she’d pick half of them.” The others she would leave in case someone else came along, an acknowledgement that the land is also a host for others. (Read: How to Visit Utah’s Most-Visited Forest)

"She never picked all the ripe berries on a plant. You would have a cluster of ten, and she’d pick half of them...an acknowledgement that the land is also a host for others."

The Roots of Mae’s Knowledge

Darren treasures those memories as more than beautiful summer afternoons. As a member of the So-so-goi, “those who travel on foot,” also known as the Northwestern Band of the Shoshone Nation, getting to know the land was an important part of his family’s identity. His ancestors had once lived by their knowledge of local plants and animals. Though her own food came mostly from a grocery store, Mae still called Northern Utah’s native plants and animals her “kinfolk” and worked to teach her family about them.

Mae’s teacher was her grandfather, Yeager Timbimboo. Yeager was born in 1848, and his earliest memories were of following the seasons and gathering traditional foods. His people would fish in Idaho, hunt in Wyoming, gather fruits, seeds and roots in Utah and harvest pine nuts in Nevada. With each passing year, however, the stream of pioneers of The Church of Jesus Christ of Latter-day Saints arriving in Northern Utah and into Idaho was straining native food sources. The pioneers’ cattle, especially, were impacting the landscape, eating or trampling the wild seeds the So-so-goi and other Shoshone bands depended on. As hungry Shoshone hunted cattle or looked for food on settlers’ farms, conflicts broke out.

During the American Civil War, soldiers who resented being stationed in Idaho added to the volatility. On January 29, 1863, United States soldiers ambushed Yeager’s people at their winter camp along the banks of the Boa Ogoi, or Bear River, and killed hundreds of men, women and children. It was the worst massacre in the history of the American West.

Yeager survived by lying on the freezing battlefield all day, pretending to be dead. After the soldiers left, he and other survivors huddled around fires for warmth. Though they would be able to pass on knowledge, an era had come to a close. They would need to find new ways to survive in their drastically altered world.

An Ongoing Legacy in Northern Utah

The modern history of the So-so-goi is woven across the landscape of Northern Utah. Helping people see that story has been an important part of Darren Parry’s life. He initially trained as a history teacher and has visited schools across Utah and Idaho to help children understand the history of this land and its peoples (Read: Paying Rapt Attention to Utah Shoshone’s Winter Storytelling Traditions). In 2020, he published “The Bear River Massacre: A Shoshone Story,” combining history with the power of family memory, and also was the Democratic candidate for a U.S. congressional seat, in Utah’s 1st district.

During his time as chairman of the Northwest Band of the Shoshone Nation, Darren led efforts to develop a cultural interpretive center at the Boa Ogoi Massacre site, just north of the Utah-Idaho border.

Visitors to the center will enter a circular exhibit space to learn about how Shoshone people who lived off the land related to the changing seasons. After passing through that space, visitors will learn about the pressures Shoshone faced as settlers arrived, the massacre and about the themes of recovery and resilience in the survivors’ history. Working with experts from Utah State University, the tribe will also restore the landscape to give visitors a chance to see what the landscape was like in the 1800s, when it nourished Shoshone nations.

Several Utah sites have later significance for the So-so-goi. In 1873, 10 years after the massacre, one of their leaders had a vision in which three men visited his lodge in Skull Valley, in the desert west of the Great Salt Lake. The messengers in the vision told him that the God the Latter-Day Saint settlers worshipped was also his people’s God and that they should be baptized into the Mormon faith. Almost the entire tribe subsequently converted. They helped build the historic temple in Logan, where they also performed ordinances to bind them together in eternity with relatives who had been murdered during the massacre.

With Mormon missionaries helping them master farming techniques adapted to dry Utah conditions, tribal members founded the town of Washakie. Darren remembers visiting his great-grandparents, Moroni and Amy Timbimboo, there. While traditional food sources were important to them, they were also avid participants in Utah’s home canning culture (Read: Utah’s Fruit Way: Harvest Time Along Old Highway 89). Each year, they would preserve fruits like peaches by boiling them and sealing them in glass jars. They also canned meat from hunting trips — Darren remembers eating canned elk when he’d visit their farm, and watching them share jars with neighbors in need.

The Washakie Ward chapel is on the National Register of Historic Places for its role nurturing a Shoshone Mormon culture, but Washakie is now a ghost town. A boom in military and industrial jobs during World War II opened new doors for people in Mae’s generation. Many of the So-so-goi moved south to work on Hill Air Force base near Ogden, where the wages were more than double what they could earn while dry farming.

In the decades after the war, most of the So-so-goi remained in urban areas, which is where more than two out of every three Native people in the United States live today. Eventually, tribal leaders built up their own businesses, including one that manages large information technology contracts with the U.S. Department of Defense. Profits from these businesses help young tribal members with their education. “We’re really good at adapting to the situation that’s been dealt to us,” Darren notes. “We’re resilient. We’re still here. We’re trying the best we can to make the world a better place.” (Read: Art Keeps the Native American Culture Alive)

"The modern history of the So-so-goi is woven across the landscape of Northern Utah. Helping people see that story has been an important part of Darren Parry’s life."

“If We’re Going to Be Saved at All”

At the same time Darren Parry appreciates university education and the benefits of modern urban life, he still finds himself turning back to his grandmother’s plant journals. He handles their pages gently, studying her sketches of the flowers and bushes she called her kinfolk. Each drawing is associated with smells, tastes and memories of time spent together. Remembering their foraging trips, and continuing the tradition of such trips with family members and friends, has kept him thinking about what his ancestors’ worldview has to teach us.

We live now in an extraction culture, Darren has concluded. Individuals and organizations compete to use up resources to generate wealth. We value speed and productivity, maximizing outputs as much as we can. During summers when smoke from wildfires intensified by climate change stretches out across Western skylines, the price we are beginning to pay for that mindset is becoming clear. (Read: Great Salt Lake Needs Your Visit)

To Darren, Mae’s practice of leaving berries unpicked, resources untapped, for those who may come later feels more profound with each passing year. Her prayers for the plants feel more urgent, her belief in what Darren calls a kinship culture, where humans recognize their connection and obligation to the natural world, feels more essential. As much as he loves chokecherry syrup, Darren is most grateful for the mindset his grandmother worked to pass on to him. “That worldview is going to save us down the road,” he says, “if we’re going to be saved at all.” (Read more on how to travel more thoughtfully, a shared ethos called Forever Mighty.)

"We’re really good at adapting to the situation that’s been dealt to us. We’re resilient. We’re still here. We’re trying the best we can to make the world a better place."

Advice from Darren Parry on Native foods and culture

The Northwestern Band of the Shoshone Nation traditionally traveled with the changing seasons in the regions now known as Northern Utah, Southern Idaho, Western Wyoming and Northeastern Nevada. The tribal headquarters is currently located in Ogden, Utah. A large portion of tribal members currently live along Utah’s Wasatch Front and in Southern Idaho.
Share On 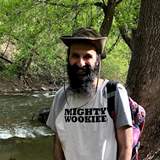 About the Author – James Goldberg

James Goldberg, a Sikh-Jewish-Mormon writer, lives in a house that flies a tattered Batman flag with his wife and editor, Nicole Wilkes Goldberg, four children who see the world a little slant and whoever else happens to be passing through. Since 2006, he’s been an active participant in the Mormon literary community, as a cofounder of Mormon Lit Blitz, as well as a theater artist and poet. His most recent novel is “The Bollywood Lovers’ Club.”

Utah is filled with a variety of different state and federal land designations, all of which share a connection with Native Nations. Whether you're on Tribal lands, in a national park or anywhere outdoors in Utah, it's important to understand that there are strong Native ties, present and past, to these lands, even if it doesn’t fit in an official category.

How to visit with respect

Get to Know Utah's Tribes