Get to Know Utah's Tribes

Learn more about the state’s distinctive groups of indigenous people through their own stories and historians.

How to Visit With Respect Whose Native Land Am I On?

Northwestern Band of the Shoshone Nation

The Northwestern Shoshone, based in what is now Southern Idaho and Northern Utah, believed all things came from Mother Earth. The expression So-so-goi, “Those Who Travel On Foot,” was used to describe the Shoshone, who traveled with the seasons throughout the Great Basin. Mountains, streams and plains stood forever, they said, while the seasons walked around annually.

Along with the Paiutes, Bannocks and Goshutes, the Shoshone were connected by ancient ancestry and language, considered Neme (the People).

When white people began settling in northern Utah, there were three major Bands of the Northwestern Shoshone. Chief Little Soldier led a group who lived in the Weber Valley. Chief Pocatello’s group lived around Grouse Creek eastward along the northern shore of Great Salt Lake. Chief Bear Hunter’s group lived in Cache Valley and along the Bear River.

Sources: Mae Parry, “The Northwest Shoshone” from “A History of Utah’s American Indians” and the Tribe’s website.

The Goshutes — the name derived from the native word Kuisutta, meaning ashes, desert or dry earth — are part of the larger Shoshonean-speaking groups. In winter gatherings, the Goshutes shared stories, some of which told of the mythical qualities of Hawk and Coyote, and pa’ohmaa, “Water Baby,” whose cries could be heard at nights but not in the mornings, and “Little Man,” who gifted power to shamans.

Their ancestral homelands were in the desert territory southwest of the Great Salt lake. They were known as efficient hunters and gatherers, who utilized nearly everything the arid territory offered — notably more than 80 wild vegetables and roots, plus crickets and grasshoppers, and nuts of the pinyon tree.

Contemporary Goshute Indians are based on two reservations in the sparsely populated western region of the state.

The Confederated Tribes of the Goshute are anchored on the Deep Creek Reservation, which straddles the Utah-Nevada border about 60 miles south of Wendover.

The Skull Valley Band of Goshute

The Skull Valley Band of Goshute lives on a smaller reservation in Tooele County about 90 miles west of Salt Lake City.

Sources: Dennis R. Defa, “The Goshute Indians of Utah” chapter of “A History of Utah’s American Indians,” and Tribe's website.

Ute legends tell the story of Sinauf, a god who was half man, half wolf, and his brothers, Coyote and Wolf. Their powers were in balance before humans were created, who were then charged with caring for the world. These myths  are the anchors of the Utes spiritual and physical relationships with all living things.

The Utes are thought to have arrived in the Great Basin territory around 500 A.D., absorbing preexisting Fremont culture. They became the largest group in the area over the next 500 years, eventually forming 12 separate Bands throughout Utah and Colorado, stretching from Fillmore in Central Utah to Colorado Springs, from Wyoming to New Mexico.

Utes read the stars and the land and followed the seasons, moving to deserts and valleys during the winter and mountains in the summer. They became noted hunters and traveled more widely after the arrival of horses during the 1600s.

The Southern Utes probably split from the Southern Paiutes about four hundred years ago. Although their languages remained very similar, the Utes developed new technologies, religious traditions and social structures.

Ute Indian Tribe of the Uintah and Ouray Reservation

In 1934, three Bands — Uintah, White River and Uncompahgre — under the Indian Reorganization Act, formed the Ute Indian Tribe of the Uintah and Ouray Reservation, east of Salt Lake City in the Uinta Basin. The busiest part of these lands is Fort Duchesne.

In 1940, the Weeminuche Band adopted a tribal constitution to  become the Ute Mountain Ute Tribe with a reservation in the Four Corners region. The Weeminuche’s traditional homelands had stretched east to the Continental Divide and west to the Abajo Mountains, with other Ute Bands and tribes sharing border areas.

The White Mesa people descend from the Weenuche Band of the Southern Utes. The Weenuche Band lived in an area bounded by the Dolores, Colorado, and San Juan rivers, but traveled throughout the Great Basin, Colorado Plateau and into the Great Plains.

In 1938, Utes filed a lawsuit against the U.S. government claiming losses from the dispossession of their homeland, and in the 1950s, Utes from all areas won a series of legal battles and received financial reparations.

Starting in the 1950s, the Utes began to build houses on native-owned land 11 miles south of Blanding, now known as White Mesa. Residents established community programs, such as educational programs, a cattle company and a store, but face the challenges of being nearly 80 miles away from tribal headquarters in Tawaoc, Colorado.

The ancestral lands of the Paiutes are anchored in southern Utah, southeastern California, northern Arizona and southern Nevada. They handed down stories of a powerful spirit, called “the one who made the earth,” represented by the sun, and the mythic heroes of Coyote and the Wolf, as well as the supernatural beings of the Thunder People and Water Babies.

The Paiutes moved according to the seasons, plant harvests and animal migrations, and were also sophisticated farmers.

The Paiute Indian Tribe of Utah, a confederation of five Bands: Cedar, Indian Peaks, Kanosh, Koosharem and Shivwits, was created by the U.S. Congress in April 1980. The Tribe’s reservation consists of ten land parcels in four southwestern Utah counties.

Sources: Gary Tom and Ronald Holt, “The Paiute Tribe of Utah,” from “A History of Utah’s American Indians” and Tribe's website.

The Tribe, located in northern Arizona and southern Utah, has shared territory with the Navajo for more than 160 years. Utah members live around Navajo Mountain, White Mesa and Blanding. Paiute Canyon, in both Arizona and Utah, is also included in the Tribe’s traditional homelands.‍

During the 1860s, U.S. military campaigns led thousands of Navajos to escape west into San Juan Southern Paiute territory, which led, some years later, for Paiute lands to be annexed into the Navajo Nation. Many Paiutes live with Navajo and Hopi neighbors on ancestral homelands within Navajoland.

The Tribe was federally recognized in 1989. “Although we may have Navajo and Hopi relatives and friends, we are different. We are San Juan Southern Paiute,” according to the Tribe’s website.

The Tribe was federally recognized in 1989. In 2000, the Tribe reached an agreement with Navajo Nation leaders to set aside some 5,400 acres of Paiute homelands, and leaders hope for federal recognition.

Navajo people traditionally refer to themselves as Diné, the People, and have a rich oral storytelling tradition, beginning with the First World of darkness, filled with mists, insect-like people and Diyin Dine’é, holy beings. First Man and First Woman were formed out of clouds, as well as other people and animal beings. They traveled through a Blue World, a Yellow World, and suffered arguments, eventually leading to a flood, which the people escaped to emerge at the present world, the Glittering World. In this world, First Man formed four sacred mountains, each given natural endowments.

The archaeological record doesn’t exactly reveal when the Diné first came to the Four Corners area, but some archaeologists speculate it was between A.D. 200 and 1300, and believe the Navajos intermingled with the Anasazi and Pueblo peoples.

Diné Bikéyah, or Navajoland, with headquarters in Window Rock, Ariz.,  has always been noted for its striking beauty and sacred mountains, but discovery of oil in the early 1920s promoted the need for a more systematic form of government. The Navajo Nation Council Chambers, established in 1923, now hosts 88 delegates representing 110 Navajo Nation chapters.

Sources: Nancy C. Maryboy and David Begay, “The Navajos of Utah,” from “A History of Utah’s American Indians,” and the Navajo Nation website. 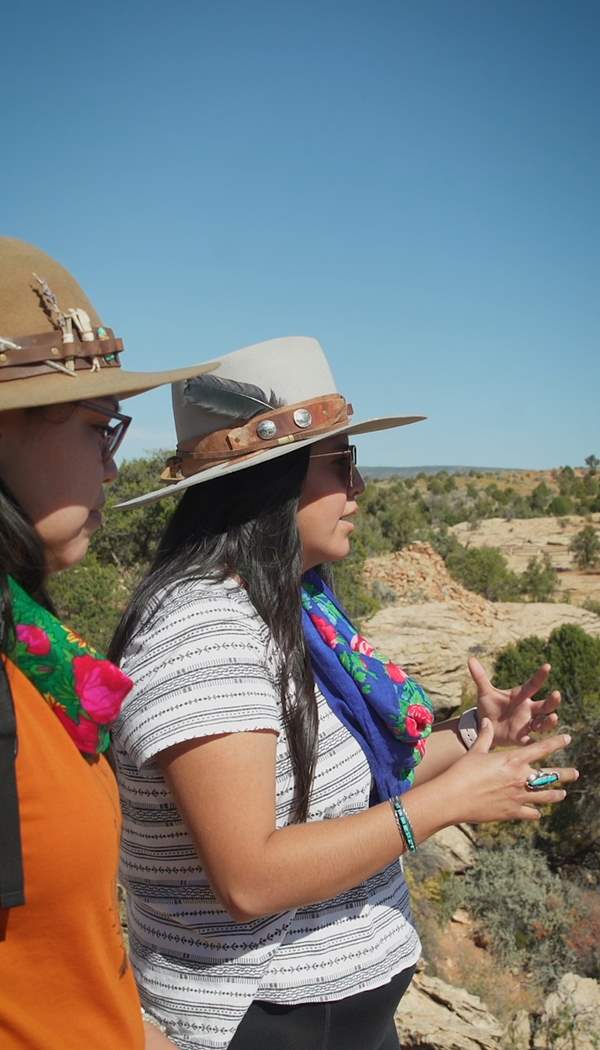 "What I appreciate about these sites is that these ancient indigenous cultures wanted to leave their story behind."

Utah is home to approximately 60,000 Native Americans, representing more than 50 Tribal Nations, with eight being federally-recognized. Learn more aboout Tribal cultures and events, and about how to visit with respect.