Just 45 minutes from Salt Lake City, Heber Valley’s state parks and national forest lands offer a world of adventure. Hike, bike, camp, kayak, watch wildlife, and reel in blue-ribbon trout while learning about nature and how to protect it.

Adam Barker
At the Wasatch Mountain State Park Visitor Center, park ranger Kathy Donnell had warned us part of the Pine Creek Trail was under water. The raging spring runoff was covering the trail, but no worry: the other side of the creek had a trail that was perfectly fine.

We set out on the 2.6-mile roundtrip trail, making our way along the cool, shady path lined with chokecherry, bigtooth maple and quaking aspen, while listening to the roar of the creek cascading below. When we reached the flooded part of the trail, we followed the simple detour park staff — attuned to the creek’s seasonal rhythms — had set up.

Earlier on our hike, we had noticed a tie-dyed sign for the “WOW” trail. Infamous among the mountain biking set, devotees make pilgrimages to experience the “Wasatch Over Wasatch” which offers up stunning (but leg burning) scenery.

We didn’t see any bikers, and only saw two hikers despite it being a holiday weekend. Instead, we shared the trail with squirrels, butterflies and a happy white pit bull lounging in the creek alongside its owner. Elk, moose, mountain lions, and bobcats live in the park’s 22,000 acres, but we didn’t see any sign of them on our hike — including signs we had just learned about before setting out.

Traversing the Seasons in Heber Valley

When we first arrived in the park, we had stopped for a chat with Donnell, who provided a quick orientation to the park and camp, told us about the trails and answered a few questions. We also wandered around the visitor center, looking at exhibits about early settlers and Native American culture, Utah wildlife habitat displays of red fox, beaver, coyote and mountain lions, and even a case of life-like scat from critters like moose, elk and cottontail rabbits.

"Teaching people about rare species and how to protect them is an important part of the job of park employees."

Out front, families relaxed in shade tents, kids kicked a soccer ball back and forth, and little ones shrieked with delight on the playground as birds swam in the pond. At the water’s edge, families lined up fishing the stocked pond. The park holds a variety of fun options – fishing programs for kids, including a special needs fishing day each year.

“This is such a good place to fish because of the easy access,” Donnell says. “It’s a great place to come and catch your first fish or practice fishing.”

"As we climbed the road, the seasons sped by in reverse. Down in the valley, temperatures soared into the 70s, and trees and shrubs were covered in leaves. But as we ascended the road, I watched our truck’s outside thermometer plunge."

Looking to explore more, we set off for a drive up Pine Canyon Road where we saw a flock of turkeys, including one that crossed the road in front of us. As we climbed the road, the seasons sped by in reverse. Down in the valley, temperatures soared into the 70s, and trees and shrubs were covered in leaves. But as we ascended the road, I watched our truck’s outside thermometer plunge, first a few degrees, then a few more, until it was almost 20 degrees cooler up top. As we gained elevation, tree leaves became smaller, then they were absent. Soon, snow dotted the woods in patches, then the ground was packed with snow. At the very top, we saw snowmobilers — quite the juxtaposition to the families in shorts and t-shirts below.

After our scenic drive, we headed down to camp. Pulling into the full campground at Wasatch Mountain State Park on a holiday weekend, I was expecting a bit of chaos. I had snagged one of the last campground reservations, so I knew we would have plenty of company. But it was surprisingly quiet in the Oak Hollow Loop.

Our site was surrounded by vegetation, and trees and shrubs encircled our little patch of space. We sat in camp chairs, peacefully watching the shadows climb up the mountains as day turned to night. The pleasant sound of a strumming guitar drifted over from a few sites down, then the night was quiet and our moods settled in for a different kind of outdoor experience, which the park is working to preserve: the pristine dark skies of the high-elevation park. Would we see the Milky Way?

Strawberry and the Early Birds

After a restful night’s sleep, we headed up to Strawberry Reservoir in the Uinta-Wasatch-Cache National Forest. Nestled in sagebrush-covered rolling hills ringed by snow-capped peaks, the reservoir has marinas for boating, campgrounds and areas with dispersed camping, and an abundance of Utah wildlife — particularly birds.

Stephanie Graham, wildlife biologist for the U.S. Fish and Wildlife Service’s Utah Field Office, notes the reservoir is great for birding, but it’s best to be there early. “At sunrise or right before is definitely the time to see the most of them,” she says.

Pelicans frequent Strawberry Reservoir, and the Utah Division of Wildlife Resources’ PeliTrack project is a fun way to see just where they are. Researchers placed GPS collars on pelicans and tracked their movements, which are displayed on their website. PeliTrack gives each bird a name and you can see Barnabus, Abigail and Chester are just a few of the pelicans spending time at Strawberry Reservoir. Other birds at the reservoir and in the nearby forests include ducks, great-horned owls, avocets, ospreys, herons, sandhill cranes and bald eagles.

Reclaiming Paradise and a Rare Pocket of Fireflies

But Strawberry Reservoir isn’t the only area near Heber Valley to provide vital habitat for birds and other wildlife. The Provo River Restoration Project worked to realign and restore the middle Provo River from Jordanelle Dam to Deer Creek Reservoir (where we’d head later in our exploration), adding vegetation and Utah wildlife habitat for vulnerable species like migratory birds and the Columbia spotted frog, a state-sensitive species. Construction on the project began in 1999 and lasted for eight years.

"The result is great wildlife habitat, and prime angling. People come from all around to catch brown trout, rainbow trout and Rocky Mountain whitefish, among others."

“We essentially rebuilt about 10 miles of river channel, so the river habitat has changed drastically,” says Mark Holden, executive director of the Utah Reclamation Mitigation and Conservation Commission. “It went from a straight channelized river to a more meandering and naturally functioning river system.”

The result is great wildlife habitat, and prime angling. People come from all around to catch brown trout, rainbow trout and Rocky Mountain whitefish, among others.

Every winter, crews count bald eagles in the area since many of these massive birds spend their winter along the river corridor. Osprey also nest nearby, and sandhill cranes are seen in the spring migrating, though some stay all summer, nesting and raising their broods.

Seven public access areas let people enjoy the 800-2,200-foot-wide public corridor along the river. Though there are housing developments in Heber Valley and a U.S. highway nearby, the reclaimed space feels miles away, and is ideal for hiking, fishing and wildlife viewing. We saw visitors with binoculars around their necks, looking for a glimpse of waterfowl, beaver, marmots, moose or even an occasional bear, mink or river otter. The area is also home to fireflies for a brief period each summer.

“Fireflies are fun to see during certain times of year,” says Mitigation Commission biological technician Paula Trater. “There are very few pockets that are documented in Utah.”

Teaching people about rare species and how to protect them is an important part of the job of park employees. Kathy Donnell loves teaching people about the natural world through her work at Wasatch Mountain State Park. She enjoys introducing visitors to the wild world and encouraging them to care about the planet and its well-being. 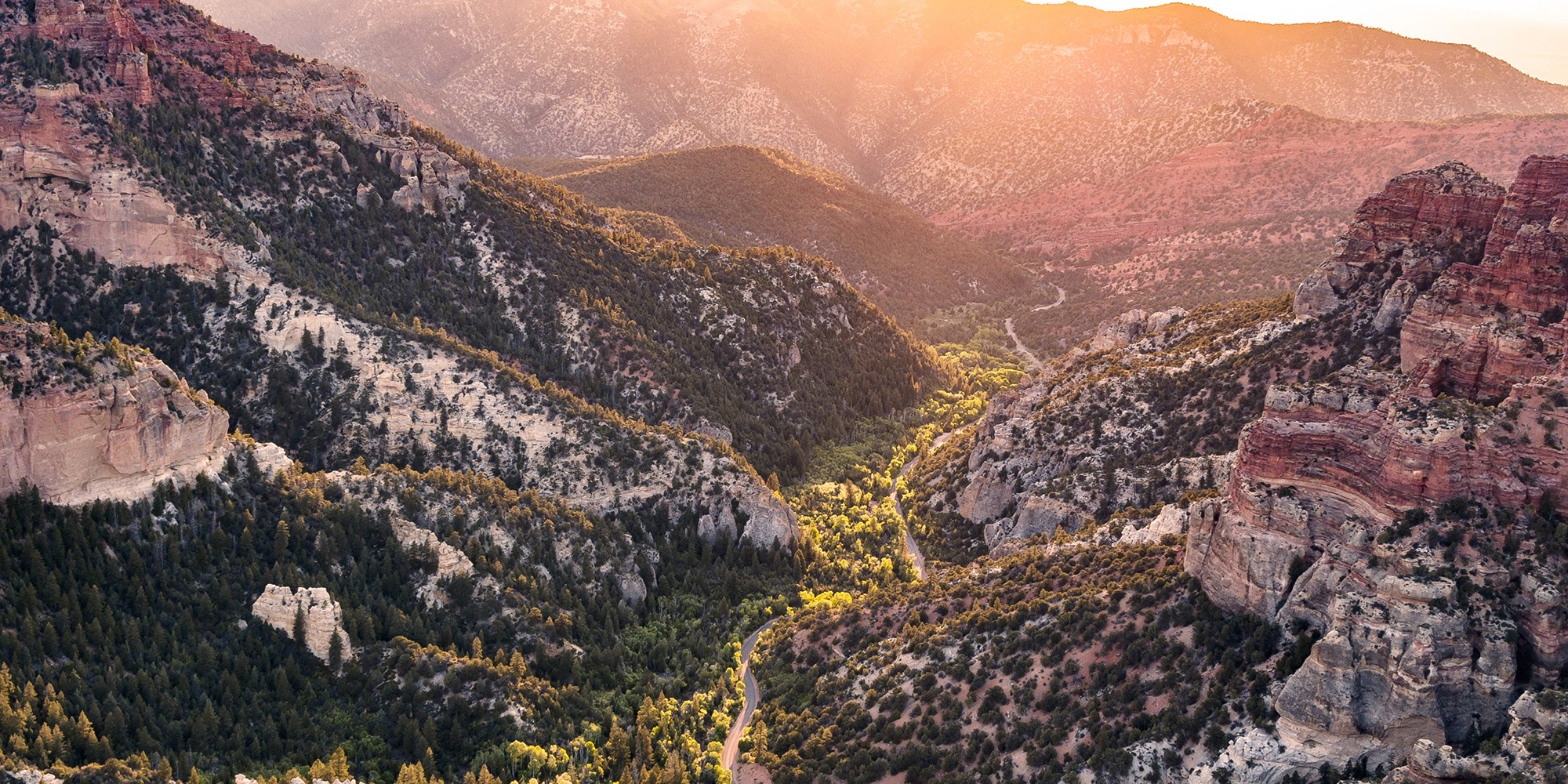 Where to Stay: Camping, RV and Lodging

Make reservations for Utah State Parks (RV, tents and limited cabin accommodations), explore nearby developed campsites or dispersed camping opportunities on the national forest or check out hotel accommodations in Heber and the Swiss-inspired lodging of Midway.

Kristen Pope is a freelance writer and editor who writes about outdoor adventure, science, conservation and travel for a variety of publications, including National Geographic, Discover, Smithsonian and many others. See her work at www.kepope.com.