Howard Browers: Visitors can experience the abundance and diversity of bird species that nest in and migrate through our area, as well as the available recreational opportunities such as birding and wildlife watching, wildlife photography, and hunting and fishing. Stop at the Wildlife Education Center to learn about the birds they may see on the 12-mile Auto Tour Loop west of the center. At the center, visitors may borrow binoculars and bird guides to enhance their visit. Special public educational events are held on selected Saturdays throughout the year.

SG: When is the best time of year for people to visit the BRMBR? Why?

HB: Anytime, as the bird community changes with the seasons. For example, bald eagles and rough-legged hawks do not nest on the refuge, but are common during the winter months. From March through early May is a great time to view thousands of ducks, geese, and swans as well as such species as White-faced ibis; American avocet; Black-necked stilt; Franklin’s gull; and Eared, Western, and Clark’s grebe. During late May through mid-July, spring migration is mostly over and resident birds are nesting. Recently hatched birds of many species are often seen during this time. From about mid-July through September the fall migration is occurring and thousands of shorebirds and waterbirds are again present as they journey south. The summer months can be challenging in some years as water can become scarce, especially during a year of low snowpack.

SG: Why is the BRMBR important for Utah’s ecosystem?

HB: The Refuge, as part of the Great Salt Lake, is a hemispherically important area for waterfowl, shorebirds and other waterbirds. The ecosystem supports large segments of the overall North American populations of many species during breeding and migration, including American avocet, Eared grebe, Marbled godwit, Snowy plover, White-faced ibis, and Wilson’s phalarope. The area hosts many bird species that stopover in spring to rest and feed during their migration to northerly breeding grounds such as Alaska and Canada. Many species that nest on the refuge or that stopover during their southern migration spend the winter in Mexico, and Central and South America.

SG: Why are wetlands in general important?

HB: Obviously, wetlands are important for wildlife habitat. Many species of birds, mammals and other wildlife depend on wetlands for all or portions of their life cycle. Wetlands can provide benefits to humans such as attenuation of flood waters, protection from storm surge, especially in coastal areas, filtering sediments and pollutants, providing food and fiber, and providing recreation opportunities such as bird watching, wildlife photography, canoeing, hunting and fishing. 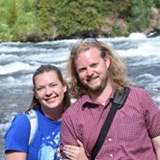