Dinosaur and Paleontology enthusiasts have long turned to Utah and its ancient residents for a conversation with our prehistoric past. New research in the Grand Staircase-Escalante National Monument, however, is now capturing the world's imagination and changing the way we see dinosaurs. Featuring the world's most complete exposed record of the earth's geologic history, Utah is THE dinosaur state — not only a real life Jurassic World, but a hotbed of new discoveries nestled among stunning landscapes you have to see to believe.

Learn from the Natural History Museum of Utah why Utah is THE state for dinosaur enthusiasts and read more in National Geographic magazine about Utah's "Science Monument." 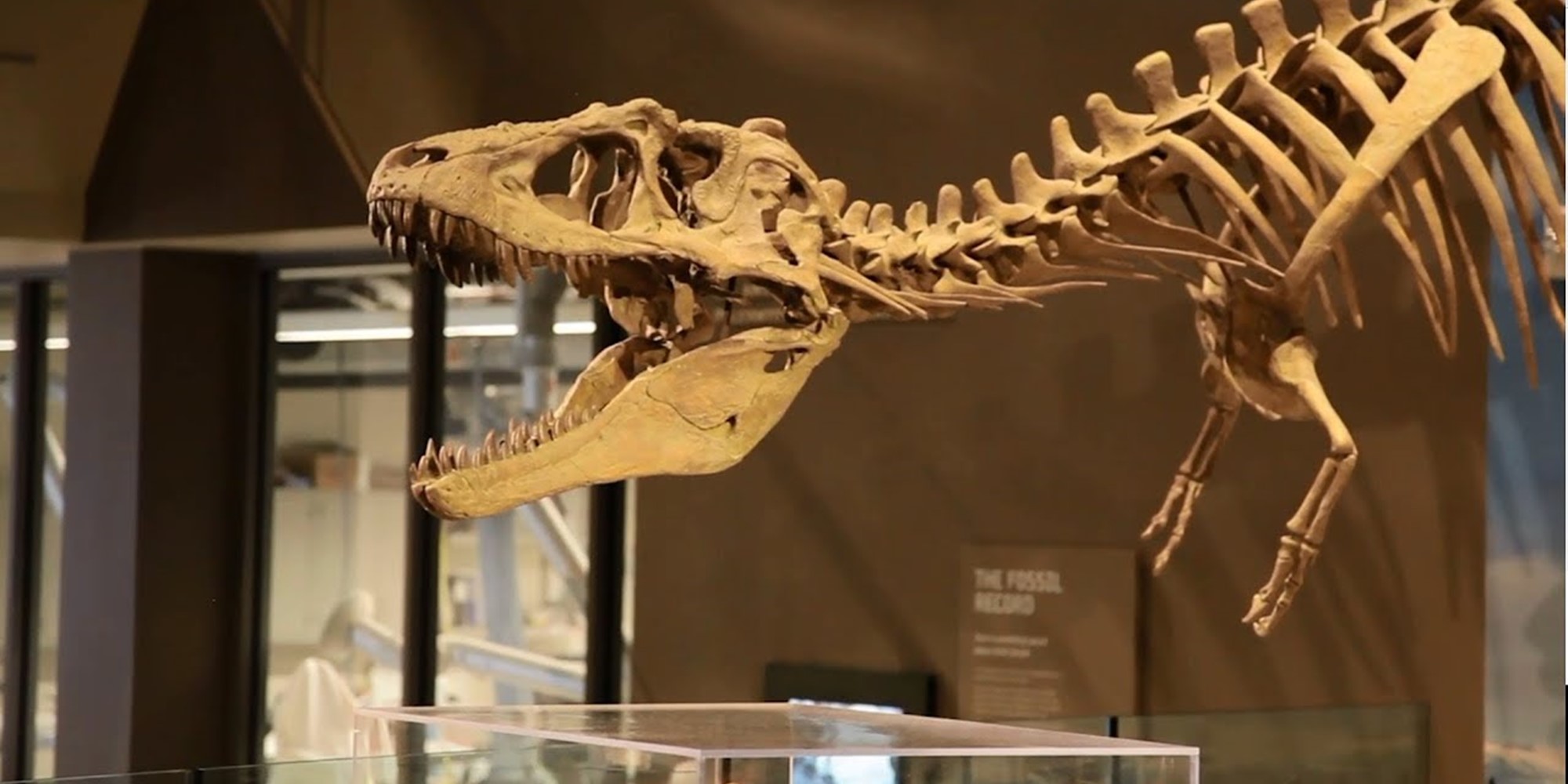 With fossil records of more dinosaur species than any other state and the most complete record of prehistoric life than any other geographic area on the planet, Utah offers one of the world's largest collections of mounted dinosaur skeletons interspersed among actual discovery sites and some of the best outdoor adventure around.
See all of Utah's dinosaur experiences below to build your own itinerary or become a Utah Dino Trekker in our seven-day itinerary that hits many of our top dinosaur sites in between stops at breathtaking national parks and recreation areas.
As the sign says, Welcome to Utah.

Natural History Museum of Utah
Salt Lake's Literal and Virtual Trailhead to the State
The Natural History Museum of Utah features an outstanding display of paleontology (in addition to several other exhibits) that covers eons of Utah's history and includes a frequently updated display of the latest dinosaur find — like Utah's state fossil, the Allosaurus, and incredible species from the Grand Staircase-Escalante National Monument research featured in National Geographic.

Cleveland-Lloyd Dinosaur Quarry
Jurassic Dino-Density
Cleveland-Lloyd Dinosaur Quarry is a great site for your budding young paleontologists, rangers and explorers. The Quarry treats dinosaur enthusiasts to the densest collection of Jurassic-era dinosaur fossils ever unearthed, and most of those bones are of carnivores like the Allosaurus. Why so mean meat-eaters? Gather the data and decide for yourself. Also check out the Prehistoric Museum in Price.

St. George Dinosaur Discovery Site at Johnson Farm
Walking with Dinosaurs
Newly discovered in February 2000, the Dinosaur Discovery Site at Johnson Farm has been described as the most significant dinosaur tracksite in western North America and houses some of the oldest and best preserved Jurassic-era footprints in the world. There are also terrific skeletal reconstructions, rotating displays and an interactive children's area.

Dinosaur Diamond Scenic Byway
A Road Through Prehistory
In total, Dinosaur Diamond National Scenic Byway covers 512 miles, creating a diamond pattern on the map through what was once Utah's Jurassic World. The Dinosaur Diamond traverses a landscape where giant reptiles roamed millions of years ago. Join dinosaur enthusiasts and scientists from around the world. Explore the museums, active dig sites and rock art along the way. Explore Utah's byways.
Moab Giants PaleoSafari
Experience a Journey Through Time
Moab Giants Dinosaur Park is an amazing combination of indoor and outdoor exhibits where technology meets prehistory. You may travel through the museum on your own, or take advantage of a guided tour that will give you an in-depth look into the paleontology and history of the Moab region.

Grand Staircase-Escalante
A Monumental Landscape
The Grand Staircase–Escalante National Monument is a vast and rugged frontier perfect for both scientific study and backcountry escape. The monument is divided into three regions: Canyons of the Escalante, Grand Staircase, and the Kaiparowits Plateau. Dinosaur enthusiasts can learn about the unique rock layers of Grand Staircase and the prolific dinosaur excavations at the Interpretive Center in Big Water, Utah.
View a printable one-sheet with additional information.
For more detailed info about Utah paleontology visit geology.utah.gov
For help in planning your visit to Utah, please all 800-200-1160

Just south of Salt Lake City, Thanksgiving Point houses the North American Museum of Ancient Life, one of the largest dinosaur museums of its kind, with more than 50 skeletal displays, standing dinosaurs and over 100 reconstructed flying reptiles.
The Brigham Young University Museum of Paleontology is recognized worldwide for having one of the most valuable Jurassic dinosaur collections, including a 150-million-year-old dinosaur egg. A great stop off Interstate 15 driving south from Salt Lake toward some of The Mighty 5® national parks of Southern Utah.
Dinosaur and Paleontology USU Eastern Prehistoric Museum in Price discovered the Utahraptor, the basis for the Velociraptor of Jurassic Park. The museum has multiple complete skeletons from the Jurassic and Cretaceous periods, the bones of which may be seen on display. The collection also contains many dinosaur tracks removed from local coal mines, dinosaur eggs and other fossils.
The Ogden George S. Eccles Dinosaur Park is an eight-acre outdoor museum with full-bodied creatures of the Dinosaur Age, including prehistoric crawlers, predators, marine creatures and flying reptiles dating from the Permian through Cretaceous periods. Realistic sculptures of more than 125 dinosaurs fill the park in a native Utah setting, all reproduced based on the findings of fossil skeletal remains, and accentuated by a high quality sound system. A 16,000-square-foot-working museum including exhibit space, a large paleontology laboratory, offices and a lecture hall.
Museum of the San Rafael in Castle Dale tells stories of a primitive past long buried under shifting soils. A replica of a fossilized dinosaur egg believed to contain an embryo is part of the collection, as well as skeletons of Allosaurus, Chasmosaurus, Albertosaurus and the great skull of Tyrannosaurus rex. A great additional stop in Central Utah near the Prehistoric Museum in Price.
Dan O'Laurie Museum in Moab, Utah, is a great addition to an Arches and Canyonlands itinerary. Dan O'Laurie tells the story of Moab's and Grand County's past, featuring an extensive rock and mineral display and massive dinosaur bones. Adults and children alike will love the museum's "hands-on" policy with many of the displays.
The Dinosaur Museum of Blanding is a great stop on a Monument Valley itinerary. The museum features skeletons, fossilized skin, eggs, footprints, state-of-the-art graphics and beautifully realistic sculptures present dinosaurs from the Four Corners region and throughout the world. You will see exhibits which show how dinosaurs were distributed globally, as well as the latest in dinosaur skin research.
Previous Image Next Image