Reconnecting with yourself, the history and the landscape

I’m fixated on the impressions left by each step of my boots across this vast, sand dune wilderness. Off in the distance a jumble of deep canyons await our arrival. The sound and sensation of the wind perks my attention. Suddenly, the rope lead in my hand tightens like a hook in the mouth of a trout. From just behind my right ear a drawn out hum brings me back to reality. Jeb, a white-furred llama with his ears pointed upward, scans the scene moments before he bends down to eat from a patch of desert grass.

Hanging out with a llama gave me insight into my own behavior during this pandemic.

Both llamas and humans share a herd-mentality and need to be part of a community. Though llamas tend to gather close to one another, when they get too close, this can result in a green and stinky cud being spit to signal a need for more personal space. Humans aren't necessarily spitting to announce spatial needs, but just think about the last time you went to the grocery store and someone got uncomfortably close to you.

As I lead Jeb further down the trail I can’t help but notice how we are naturally distanced from the llamas and each other. We are using different trails than are commonly used by hikers and are still getting that important time to enrich our bodies and minds.

Alongside our guide, BJ Orozco, of the Boulder, Utah based outfitter, Llama2boot is my wife, Lauren, our one-and-a-half-year old daughter, Lilah and a train of four llamas. People often ask whether you ride the llamas. They are pack animals and are with us on our journey to help carry our loads, not our bodies. Each llama can haul about 50-80 pounds of gear. I do my best to lead this fury beast responsible for carrying our gear for the next six days.

Orozco has been guiding in the area for the last 20 years and has been running his own show for the last ten. Originally lured in by the sheer scope and beauty of the region, he has created a business that allows him to explore and share one of the most beautiful places on the planet. This combination of location and his unique means of travel through it allow both the access and comforts one cannot get without a guide.

Looking out at the maze in front of us, it’s hard to believe that we are even following a route. The Grand Staircase-Escalante National Monument is over a million acres of rugged wilderness, canyons and a window into the past (Watch: Roaming Grand Staircase). But, Orozco knows the route well, and we confidently follow.

“What began as game trails were turned into primitive trails used by the Anasazi”, says Orozco. “Next came the pioneers of the region, who improved those trails for their sheep and later cattle and horses”.

Continuing the tradition, Orozco and his llamas use these same routes to lead people into canyon country. He considers it a personal treasure wandering this wide open country and finding these obscured pieces of history.

May 2020 looks much different for Orozco and his family of pack llamas. In previous years, abundant free time was a rare occurrence in springtime. A combination of drop camps, where he uses the llamas to drop off and pick up clients at selected areas, and fully guided trips generally equate to 70 percent of his annual income. With the COVID-19 pandemic came big changes both personally and financially.

Orozco has been forced to find side work as a stone-mason. And giving nine working llamas a season off presents its own challenges.

“It’s a bummer, as we have a few new training llamas and some I’m trying to get back into a routine,” says Orozco. The busy spring season is a great way to break them in. Instead it’s going the opposite way. “They see the green pasture at home and think that hanging out and eating is all they have to do. Usually as soon as the grass starts growing they are working and when they come back after the season, there is knee-high green grass for them to eat. It’s supposed to be their llama payday. Our training season has really suffered.”

Evidence of this can be seen as one of Orozco’s newer llamas named Roy is panting heavily as we drop through a rocky makeshift section of trail just above the Escalante River. A consistent, audible hum alerts me that he is either tired, stressed, hot or concerned. It reminds me of the first time I hop on my mountain bike just after the ski season ends.

Six hours later, we reached our camp amongst the willows and cottonwoods near the Escalante River. Both humans and llamas rejoice as we pull saddles and make camp.

Llama packing and social distancing pair well together. Because of basic backcountry sanitation protocol, Orozco and his team have always taken cleanliness seriously.

“If you have llamas in between guests and separate tents we will always be distanced. Common areas take a little more work but it’s very manageable,” says Orozco.

Over the next four days we explore the mind-boggling geology in all directions of our camp. Wading through the river, searching for new routes and exploring side canyons is what draws people to the region.

"Llama packing and social distancing pair well together. Because of basic backcountry sanitation protocol, Orozco and his team have always taken cleanliness seriously."

One of the days Orozco and I go looking for an old cowboy trail. In the process we span miles of serpentine red rock landscape. Another day Lauren, Lilah and myself trudge our way up the Escalante River in hopes to cool down from the hot desert sun. Deep slot canyons and their sometimes secret swimming holes did not let us down.

Both Orozco and I share a similar guiding mantra. In an environment with this much complexity it’s all about exploration and self discovery. A guide’s job is to aid and enable. Orozco holds a wealth of local knowledge. As an avid hiker and hunter he has an immense understanding of the shape and history, flora and fauna of the area.

With all our creature comforts and wanderlust needs met, the time had come to hit the trail and head back to Boulder. Our goal was to leave later in the afternoon and skip the heat of the day. Orozco set out solo to check on a crux section of trail that had given the llamas grief on the way in.

By the time he returned, our crew of Jeb, Montana, Roy, Knick and Zorro were fired up and ready to roll. Saying goodbye to our pleasant riverside shelter, we saddled the boys up and started out the way we came in.

Listening to Lilah giggle from the carrier on my back is a memory that will be etched in my mind forever. Bringing her on a six day adventure into the Escalante would not have been possible without the aid of pack animals. Hopefully, the way in which Lilah mingled with the llamas and enjoyed her time wading through the river and wandering through the canyons will be imprinted on her mind for years to come.

Like clockwork we emerged from the trail just as the sun went down in the west.

This pandemic forced us to rethink how we go about our daily lives. For me, leading a llama into this intricate network of walled passageways reconnected me to myself, my loved ones, the natural world and an important piece of ancient Native American history.

The desert holds a multitude of secrets that can’t always be found at the click of a button. These secrets often require planning, a trusted guide, a touch of serendipity and maybe even a herd of pack llamas. Ancient petroglyphs, giant alcoves and natural springs dripping from canyon walls are all hidden among the sandstone cliffs — for those who go looking.

“Llamas are like other people's cats,” says Orozco. “They are curious and act like they want to be friends. But when you get close, they back off.”

Orozco has owned Roy for less than a year. For a llama with a troubled past he is a rare find. He possesses slight identity issues because he grew up with goats. He basically has no real (llama) role models. He was ecstatic when he came to the ranch and saw all the other llamas.

Named after Tony Montana of Scarface, he arrived with a group of five llamas from Colorado early in Orozco’s career. He was five at the time and had never been handled or haltered until one night, when he was flash trained. Since then he’s been all in.

He was purchased from a known breeder in Washington State. Jeb has issues drinking out of creek and rivers. This is possibly due to his skittish nature. It may also be due to the fact that he fears his own reflection. As it turns out, he’s a bit of a narcissist.

His brother Knick was also on my pack trip.

Less than a year old

Natives of Argentina, yet Utah born and raised, these three have a Guanaco look like their father Juan. Juan is also a working llama on Orozco’s team. The Young Guns are growing up and living in a separate corral from the rest of the crew at the ranch. They are the future of the business.

Ace Kvale is a photographer and guide in Boulder, Utah. Whenever possible, he hikes Utah's Grand Staircase–Escalante National Monument with his dog.

Traveling During The Time of Coronavirus

Navigating an adventure in the time of the COVID-19 pandemic can be a challenging matter. While there may have been a lull in travel due to shelter-in place orders, backcountry travel numbers, especially in Southern Utah, are still high.

“Without resources, park services and guides at work things can easily get out of hand,” says Orozco, who is worried about areas of excessive use and trash he has seen in various locations, especially toilet paper.

“As we saw a few years back with the government shutdown, there tends to be a rush of people when things reopen, says Orozco. With that comes the need for responsible travel, and remembering the shared stewardship ethic of Forever Mighty.

Supporting a local guide is a great way to gain knowledge and help local communities during the economic recovery phase. There is no better time to be a steward of these beautiful lands and to champion supporting local wherever you are. 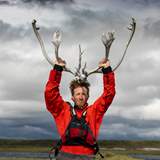 About the Author – Ryan Salm

Ryan Salm never misses a moment to step completely out of his comfort zone and try and keep up with athletes who are in way better shape than he is. After all, how else would he gather the photographs and stories to tell afterward? Combining his passions with a deep client base and the ability to produce award-winning work keeps him continuously creating high-caliber content across genre lines. Follow him at ryansalmphotography.com and @ryansalmphotography.