Returning to the surface of the Earth after a visit to Timpanogos Cave, I felt thankful for the plants, like an amazed child learning about the magic trick plants perform, turning sunshine into salad. It turns out that spending a few hours underground, admiring a mountain from the inside out makes you philosophical about the sun.

On Mount Timpanogos's western bench, a few miles downhill from the cave in the growing town of Pleasant Grove, Utah, Snuck Farm is creating the perfect way for you to show your gratitude to the plants — by eating them. A modern hydroponic lettuce farm, Snuck is Page Westover’s solution to the problem of how to make the last of her family’s farmland productive again.

With only a small piece of the original farm left, she and her family embraced hydroponics — a style of agriculture that doesn’t require soil — because it can yield many times more produce than the same amount of space farmed with traditional methods.

I secretly hoped that the name Snuck came from the sound of crunchy lettuce being chomped, but the mystery of the name was soon solved. The 3.5 acres of property where Westover’s greenhouses now stand are what remains of the farm established by her grandfather Boyd “Snuck” Fugal

The gleaming greenhouses pump out around 4,000 prime heads of lettuce each week, harvested with help from her parents, husband and kids, and they aren’t even close to their full capacity after one year in operation.

With Adobe and Mountain Point Medical Center among their customers it seems that their motto “Eat well, Do Good” is starting to pay off — and you can tap into that well-being at a growing number of restaurants and businesses throughout Utah Valley and the neighboring Salt Lake Valley, or at Snuck Farm events. (For volunteer-minded visitors, consider reaching out in advance to find workday opportunities on the farm.)

As impressive as the facility is, Page is a little sheepish showing it off. Clearly she won’t be satisfied until the community has embraced this place as part of their own legacy.

To facilitate that, the family has constructed a beautiful barn with chickens and goats who dispose of lettuce trimmings, and a teaching kitchen that periodically hosts cooking classes or other workshops.

In addition, Snuck has hosted school groups and Scout troops come to munch lettuce and learn the trick of growing greens without soil in the winter.

Bombay House
One of three locations, this cultural immersion is also representative of a noteworthy international dining scene that the Provo area's population supports.

Over the hill, east of Mount Timpanogos, lies the Heber Valley and the little town of Midway in Wasatch County.

A wagon road up Provo Canyon made the Heber Valley accessible in 1858 and many of the current residents are descendants of Swiss immigrants who settled here in the 1860s and 70s.

Among them is Grant Kohler of Heber Valley Artisan Cheese. His grandfather, Albert, purchased a small farm here with no running water or electricity in 1929, just in time to struggle through the Great Depression. At the time there were around 150 other dairy farms in the valley. Grant has evidently inherited Albert’s perseverance because this is the last dairy left.

Grant and his son, Russ, are the farmers and cheesemakers here. Both were educated as engineers and it has taken all their ingenuity to keep the farm in the family and in Midway. Modern wisdom in a world of low milk prices dictates that farmers move to more affordable land and enlarge their operations to make the most of slim profit margins on each sale.

Instead, the Kohlers have chosen to stay relatively small — their herd consists of around 150 Holstein-Friesian cows that graze the pasture.

Five years ago, they ventured into cheesemaking to add value to the milk rather than selling it off in bulk. By making award-winning cheese and offering raw milk directly to customers, the dairy is now thriving right where it belongs, giving new life to old-school wisdom and ensuring a place for new generations of Kohlers on the family farm. Meanwhile, Heber Valley's own dining scene has surged in recent years, complementing the scene in the valley below and enticing visitors to linger. (Read: Heber Eats.)

Smack in between Snuck and Heber Valley Cheese on the green flank of the mountain itself you’ll find the Sundance Resort. Drive past Timpanogos Cave and the Alpine Loop Road takes you from subterranean to the top of the world and then to this world-class spot for a taste of local food and a glass of wine with a great view.

Founder Robert Redford said the goal at Sundance was to “Develop very little and preserve a great deal,” a point of departure that’s something of an innovation in the world of resort development.

Sundance on a summer afternoon is peaceful above all else. I felt a calm there that made me want to do nothing more than stare up at the mountain’s 12,000-foot peak and contemplate the ways that Sundance, Snuck Farm and Heber Valley Cheese are all devising new ways to keep old legacies alive and save the spirit of small Utah farms.

Snuck Farm, Pleasant Grove. Check ahead for upcoming events or find them at the Downtown SLC Farmers Market this summer.

Sundance Mountain Resort. A great place to stay or just visit, with a range of summer events, dining options and live music.

Pizzeria 712, Orem. Maybe the best wood-fired pizza this side of the Mississippi, this restaurant has real commitment to local, organic ingredients.

Timp Freeze, Midway. Down home shakes and burgers at a great price on your way to wherever. 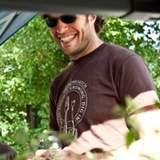 About the Author – David Vogel

David Vogel is a photographer currently based in Salt Lake City, Utah after having spent a decade in New York City assisting many of the industry's most accomplished photographers. With an education in biology, a first career as a chef and experience with casting, location scouting and production his unique combination of talents lends a broad and original perspective to photographic projects spanning a wide range of subjects. He was been co-publisher and principal photographer for Edible Wasatch magazine, a publication dedicated to highlighting the efforts of farmers, chefs and food artisans to restore our food system to a place of richness, sustainability and health.