How to Poop in the Outdoors

Before your adventure, make sure you know the proper way to heed the call of nature while in the wild.

During the pandemic, a group of Utah state biologists completing a bighorn sheep survey came upon a most curious sight. Deep within a slot canyon in a remote part of the state’s red rock desert stood a shiny, triangular-shaped metal pillar. When word of the so-called Utah monolith got out, hundreds of people from across the country flocked to the Bureau of Land Management (BLM) site where it stood hoping to catch a glimpse of — and, certainly, a selfie with — the obelisk. The frenzy died just days after the strange pillar’s discovery when it was toppled and removed by four Moab residents in the name of “leave no trace.” The artist responsible for making and placing the monolith remains unknown.

Estimates are that, before it was encountered by the biologists, the Utah monolith stood in its remote canyon for more than four years; which is, somewhat ironically, the same amount of time it may take the land around its remote desert location to heal from the barrage its discovery caused — due to the haphazard trampling of fragile desert plants and cryptobiotic soil nearby (Read: “Protecting Utah’s Living Landscapes”). But another, much more gross side effect of Utah’s monolith craze is the toilet paper and human waste its seekers left behind.

Pooping is, of course, a universal part of the human experience. But there’s a reason we think of human waste as so icky. It’s packed with dangerous bacteria that, if touched or ingested by people or animals, can cause serious illness and even death. And so it’s important that, before heading off on that multi-day backpack, river or rock climbing trip, you set aside your squeamishness and think about a responsible plan for when nature inevitably calls. (Read: “How to Camp on BLM Lands”)

In non-desert environments, human waste can decompose when buried in soil rich in organic material, according to Kimberly Finch, BLM Utah communications director. This type of soil, characteristically dark like the dirt in your garden, is prevalent in forested areas where lots of trees, shrubs and plants are present.

The desert areas covering much of Utah, on the other hand, aren’t covered by much vegetation and therefore decomposition takes much longer. “In some arid environments, human waste will not break down for over a year,” Finch says. In other words, one outdoor lover’s careless movement can make for another’s really bad, terrible day, even months after the initial fact. Also even in the state’s more verdant areas, near rivers, streams and lakes, water can become infected from feces. Don’t poop there, either.

The most responsible option for taking care of what comes out when you’re in the desert — or in a narrow canyon, on frozen ground, on a popular trail or near a water source — is to pack it out. Before you start gagging at the thought of tucking a bag of feces into your pack, those who came before you have devised some pretty creative and effective methods of packaging up doo doo.

"It’s important that, before heading off on that multi-day backpack, river or rock climbing trip, you set aside your squeamishness and think about a responsible plan for when nature inevitably calls."

When hiking, backpacking, biking, driving, or looking to keep things lightweight, the most convenient and sustainable option is purchasing a Waste Alleviation & Gelling bag: a double-walled, self-closing human waste container complete with crystals or gels to neutralize the dangerous pathogens in human waste, allowing direct disposal into an outdoor trash can after use. W.A.G. bags tuck easily into a pack. (After use, you can tuck it in a separate, exterior pocket in your pack, so the bag doesn’t mix with sunscreen or other items.)

In cases where you’re camping overnight in the same place, or traveling on a multi-day river trip, you can use a pre-purchased portable camp toilet, or make your own by lining a five-gallon bucket with a screw-on lid with a W.A.G. bag. (Check out these recommended potties). For river trips, portable toilets are required with your permit and negligence will result in fines. At the end of your trip, dispose of all your groover collected waste at an RV center or dumping station with designated facilities for this specific purpose. Ask a local field office for locations.

To keep things as fresh as possible, sprinkle kitty litter and Poo Powder into your portable pooperia after each use. (Note: One W.A.G. bag is good for about three to four uses.) You can also purchase portable toilets, often called “groovers” at most outdoor supply stores. Don’t forget to designate a pee spot nearby the bucket, as you’ll want to keep the W.A.G. bag as liquid free as possible.

Cleanwaste, Restop and Reliance W.A.G. bags are available through local outdoor stores and internet retailers. (Still have questions? Check out this informative and entertaining W.A.G. Bag How-to video from the Leave No Trace Center for Outdoor Ethics.)

"In cases where you’re camping overnight in the same place, or traveling on a multi-day river trip, you can use a pre-purchased portable camp toilet, or make your own by lining a five-gallon bucket with a screw-on lid with a W.A.G. bag."

May I Use the Cat Hole Technique?

At this point, you may be wondering what happened to the old cat-hole technique. While many now view using a cat hole to relieve oneself in the outdoors as unsustainable, if you are in a forested area with non-frozen, organic soil and are at least 200 feet from a trail, campsite or water source, using a cat hole can be acceptable — as long as it is done properly.

Dig a 6- to 8-inch-deep hole in the ground with a small, triangular trowel. (Consider digging near a large rock or tree to allow something to hold onto while you squat.) When finished, fill in the hole completely. Be sure to bring a doubled, resealable bag for packing out toilet paper — never place toilet paper in a cat hole or on the ground — no one wants to see a Charmin flower in the woods. Don’t burn it, either, as rapidly spreading wildfires are a danger in drought seasons (Read: "How to Prevent Fires").

It is, of course, best to take advantage of a vault toilet when you come across one at a trailhead or camping area, but there is nowhere close to adequate coverage across all of Utah’s public lands and parks, and you shouldn’t assume a toilet will be available when you need one. Never throw anything into a vault toilet that you wouldn’t throw into your own toilet in your home, as random items (including feminine hygiene products) can damage the pumping equipment used to clean vault toilets.

And as you might guess, objects thrown into vault toilets are extremely difficult (and disgusting) to remove. “We have pulled tents, trash bags full of garbage, laptops — really all kinds of things — out of vault toilets,” Finch says. “We also ask that visitors not stand on toilet seats as the full weight of a human can break the seat structure.”

Though, as acknowledged previously, everyone poops, specific situations abound. Utah State University’s Water Quality Extension and the Utah Division of Water Quality recently launched an outreach campaign that, in part, answers the most pressing toileting-in-outdoors questions. To find out more, visit gottagoutah.org.

Utah’s public lands — from the High Uintas Wilderness to Lake Powell — belong to all of us. One way we can all do our part in protecting them is by not crapping all over them. 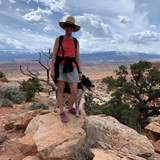 As you plan your travels, have you considered ways you can visit more thoughtfully? There are lots of ways to minimize your impact, while maximizing your experience. Everyone has a responsibility to visit with respect, and take care of one another and our lands. This is a shared travel ethos we call Forever Mighty.

What can you do?

We've launched a series about the lives of Utah’s guides — people whose avocations and vocations have drawn them deeper into the canyons, mountains and deserts that most of us simply visit. Those who help us recreate responsibility. Those who teach us how to be Forever Mighty.