Uganda to Utah: How the Mountains Taught a Pro Snowboarder To Thrive

Professional snowboarder and Utah local Brolin Mawejje has faced his share of obstacles, but on the snow is where he finds his flow.

For Brolin Mawejje, balancing his aspirations all comes down to staying connected to his destiny.

The pro snowboarder and Olympic hopeful draws upon a well of inner strength and equanimity to rise above a turbulent childhood and accomplish a number of impressive goals while also serving as an inspiration for many across the globe.

The youngest of seven, Mawejje was raised in Kampala, Uganda, by his dad. His mom had moved to the United States when he was two. Facing financial strain at home and rough treatment at school, Mawejje flew to Boston, Massachusetts, at the age of 12 to live with his mom. But the transition proved difficult, and he moved in with a friend’s family, The Hesslers, with whom he later relocated to Jackson Hole, Wyoming.

It was in Jackson Hole where Mawejje’s passion for snowboarding ignited.

“I grew up in the inner city in Kampala where we did not have mountains and similarly, when I moved to Boston, the mountains weren’t as big,” says Mawejje. “So Jackson was my first exposure to big mountains.”

After high school, Mawejje made his way to Westminster College in Salt Lake City so that he could pursue his medical studies and continue snowboarding. “I ended up from Uganda to Salt Lake City mainly because of snowboarding and snow,” says Mawejje, “I wanted a place...with a mountain community and a college. I had this image of Park City as the mecca of snowboarding.” (Read: “A Cauldron of Continuing Olympic Fervor”)

“I have blossomed by the mountains of Utah. Literally and figuratively,” says Mawejje. “I went from not being as sure of myself — shoulders down, head hung low, staying out of trouble — to holding my head high and feeling proud to be who I am.” Utah’s outdoors can often have that restorative effect. (Read: “Finding Strength and Inspiration Deep in the Utah Desert”)

"I have blossomed by the mountains of Utah. Literally and figuratively."

From Mentee to Mentor

Mawejje’s first introduction to snowboarding and the outdoors was through Chill Boston, a youth development program that teaches kids resiliency through board sports. Participating in the program provided Mawejje with a vehicle to better understand and confront some of the personal struggles he was dealing with at the time.

“One of the first challenges that you face in snowboarding is you get on this chairlift and once you're at the top of that mountain, it's on you and your own skills to get yourself down,” Mawejje explains. “There are barriers, twists and turns, getting through trees, and at the beginning, it might not be graceful but you’re still maneuvering.”

Mawejje believes the Chill program paid dividends to his development as an individual. Through the program, he found friendship and community, was given actionable tools to deal with his struggles and was introduced to the lifestyle of snowboarding. The gifts he received from Chill stoke his desire to give back, “I can’t pay it back so I try to pay it forward.”

Mawejje became an official ambassador for the organization at the beginning of 2020 and prior to that served as a volunteer for Chill Salt Lake City. But whether he’s an ambassador or not, his goal remains the same: to help pass along the tools so that someone else can survive.

“I survived somehow,” Mawejje reflects. “I don't know how, but I do know that I'm not the only one. I know there are many people like myself who can benefit from just the same focus and peacefulness that snowboarding brought to my life. Even if it’s just for an hour or a day, or even just a weekend.”

It’s this self-assured approach to life and its stumbling blocks that is helping to propel Mawejje forward.

"I know there are many people like myself who can benefit from just the same focus and peacefulness that snowboarding brought to my life. Even if it’s just for an hour or a day, or even just a weekend."

A Dream Delayed, Not Lost

In 2017, Mawejje was told by doctors that he had a potentially fatal heart condition called arrhythmia, which makes the heart beat erratically. The condition was discovered at the 28th Winter University Games in Kazakhstan, where Mawejje was just 15 points away from opening a quota spot for the 2018 Olympics — a spot that could have made him Uganda’s first winter Olympian. And in 2022, illness sidelined him from the Olympic qualifiers. But instead of getting knocked down, Mawejje uses it as fuel to push forward.

"When you're trying to climb a mountain, you're not going to get to the top unless you run into some obstacles," he explains. "With every obstacle that's been thrown my way, a blessing has also been thrown my way. How you walk through that darkness to the other side shows who you really are — not when things are shining."

His initial goal was to first become a snowboarder and then to become a snowboarder who was comfortable in his own skin and within the larger community of snowboarding. He sees the Olympics as the highest caliber of competition and something that would allow him to continue to prove his skill set. (Read: “Olympic Legacy”) But it’s never just about the Olympics.

“The older I've grown, the more I've realized it's within my nature to try to strive to do the best I can within that hour, within that day,“ Mawejje says. “I've never been a person who can do one thing, and once it's done, go kick my feet up and watch Netflix and just twiddle my thumbs. I have a fear of failure. I have a fear of receding backwards. And I think between that fear and the determination to make something of myself, I keep pushing myself forward.”

"On and off the slopes, Mawejje has become a representative for many — Ugandans, Africans, Black Americans, as well as others who don’t fit the stereotypical mold of a winter sport athlete."

Reaching Beyond the Mountain

On and off the slopes, Mawejje has become a representative for many — Ugandans, Africans, Black Americans, as well as others who don’t fit the stereotypical mold of a winter sport athlete. It can be a lot for one person to shoulder, but Mawejje takes it in stride by showing up firmly as his authentic self. “I do want to be a voice in the snowboarding community. Representing not only the African continent and nations. But representing African Americans and Black snowboarders, and diverse individuals who are eager to snowboard and find the same joy I was able to find.”

“As I've grown, I've realized the blocks and the barriers that I’ve faced in life have given me an opportunity to do something that could be impactful...that can really inspire others and can change lives.”

Mawejje wants his impact to reach beyond just snowboarding. With a degree in chemistry and public health and master’s in epidemiology, he continues to work in the public health field when he can. He’s also done volunteer work with nonprofits across Africa in support of his long term goal of becoming a doctor. Like everything in his life, he approaches his medical career by staying steeped in gratitude and envisioning what his greatest impact on the world can be.

It’s clear that Mawejje will continue to be a bright light in this world, regardless of his Olympic status. “At the end of the day, the Olympics don't define me,” he says. “My goals don't define me. I define who I am.”

"When you're trying to climb a mountain, you're not going to get to the top unless you run into some obstacles," says Mawejje.

3 Tips for Getting Started in Snowsports

Athletes like Brolin Mawejje are helping to broaden the image of the typical snowboarder or skiier. Still, it can feel difficult for people of color to find inclusion and belonging in snowsports. Here are three tips for getting started with winter sports: 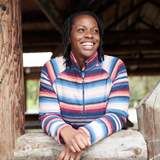 About the Author – Nailah Blades Wylie

Nailah Blades Wylie is a content creator, consultant and the founder of Color Outside, a community for ambitious women of color who are ready to create unapologetic, soul stirring lives through outdoor adventure. Nailah started Color Outside as a safe place for women of color to come together and unlock where they're feeling stuck so that they can fully step into their joy and shine. When she's not leading adventure retreats or consulting with brands you can find her hiking with her husband or playing intense games of hide-and-go-seek with her two tiny kids. You can find Nailah online at nailahblades.com or on Instagram and Facebook.

To put it simply, the riding in Utah is epic. Fifteen ski resorts are scattered along mountain ranges that are perfectly positioned for dumps of fluffy powder all winter long, most of which see an average of 600 inches of snow most years. Best of all, there are 11 resorts along the Wasatch Mountain Range, so you can ride new terrain every day.

A three-day ski vacation itinerary with quick access to some of Utah's best ski resorts for fresh powder.