“No two snowflakes are alike” is a scientific fact heard in such a variety of contexts that it has become an accepted idiom. Our minds have come to accept the idea that nature’s cascading confetti is a conglomerate of individuals.

Head tilted upward, we can imagine that each frozen body making its heavenly descent, has embellishments that — while similar to its neighbors — set it apart completely. Imagine looking to the sky and noticing one of those flakes was orange or purple. While we’ve come to accept that snowflakes can each have a unique shape, could we be accepting of the idea that snowflakes might also be a variety of colors?

What about those who partake in the sports that snowflakes make possible, do we believe skiers and snowboarders can come in a variety of sizes, shapes and colors? Artist Lamont Joseph White has taken his brush to canvas in hopes of expanding perspectives, opening dialogue and sparking change.

Lamont was born in Manhattan and raised in Queens, so it took a little time before the idea of skiing or snowboarding even crossed his mind. It was when his family relocated to suburban New Jersey that he noticed kids showing up to school on Mondays with lift tags and new stories to tell. Curiosity sparked, he began craving an adventure he’d not yet experienced. And in 1981 at the age of 13, he got a tease.

Driving home from a Pennsylvania camping trip, his family's car detoured to the base of a ski resort as the halogen lights set the snow aglow. While absorbing the spectacle, his family ran into another family from their neighborhood. It was all so serendipitous, Lamont was convinced this was going to be his chance to test his athletic abilities and return to school with stories of his own. But it turns out they were just there for a quick visit. “I thought I was going to get on skis and see what it was like,” he says 39 years later, the disappointment still fresh as he recounts the story.

It wouldn't be until his mid-twenties that Lamont finally took to the slopes. Years after completing his fine art studies at New York City’s Fashion Institute of Technology, he joined friends at Mountain Creek, New Jersey’s largest ski resort. His friend “mentioned the ‘pizza’ and ‘french fry’ thing,” suggestions given to beginner skiers about how to position their skis, Lamont recalls. “Then he said: ‘Whatever you do, just commit,’” advice the artist clearly still takes to heart. Skiing became a spirited relationship, until he later turned to snowboarding.

"Artist Lamont Joseph White has taken his brush to canvas in hopes of expanding perspectives, opening dialogue and sparking change."

It was Lamont's wife, a University of Utah graduate, who inspired his first trip west. It was the summer of 2000, and standing at the base of Park City Mountain, Lamont looked upward and recognized the ski potential. Having only snowboarded in the East and Midwest, Lamont vowed to come back and ski Utah the following winter.

“The snow. The terrain. The atmosphere. It’s really a different experience,” he says now. “It hooked me all the way." Visit after visit, the artist saw a blank canvas that would inspire him to relocate his life. In 2012, Lamont officially made Utah home, and he now splits his time between Park City and the artist community of San Miguel de Allende in Mexico. In 2020, Park City was also where Lamont showcased his painting collection, “Skiing in Color.”

When I had the honor of speaking with Lamont, we started by getting to know each other. We spoke about our favorite runs in Park City, our ideal conditions on the mountain and the boards we’re riding for the season. Our conversation, much like typical snowfall in Utah, got heavier as it progressed.

Was there any specific turning point that sparked the "Skiing in Color" collection?

It was a conversation I was really just having as part of humanity. Also as part of the Black community, where I think most of us have collective awareness or collective consciousness of our color. We don't think about it all the time but we get reminded depending where we are and what space we're in (in this case, the slopes). These types of moments just accumulate in your psyche. I've heard some manufacturers say that Black people don't ski, so we're hoping that we could be a part of changing the narrative. Not just among the manufacturers, but what we are conditioned to see on the mountain. Black people, white people, brown people — whatever. We are conditioned to see certain things; certain faces in certain spaces. I just began to solely focus on Black skiers and snowboarders out of my own personal desire, and I was not sure who would see it or what the reaction would be. (Read: "Uganda to Utah: How the Mountains Taught a Pro Snowboarder To Thrive")

What has the reception been from the Black community?

Exceptional — from both Black skiers and Black folks who don't ski. Initially, my proudest moment was when Black skiers saw my work, they saw themselves represented doing one of the things they love to do. I have my own validity in my work, but I do like to share my art. I was very proud that it reached them the way it did. For the non-skiers who happen to be Black, just speaking of the Black community broadly, they were very happy to see it because what it speaks to is that there are spaces where we are extreme minorities (the ski slope happens to be one of them). When they see themselves reflected in a place where they are a rare sight, they like ‘that it gives us the feeling that we belong everywhere.’ We have our parents and grandparents, those who have had to continue to build this place to where we are. Now we're realizing there's no door or place that we can't be. I think it's the power in what we see. That's what I hope I can add to the conversation.

What was the motivation behind the use of Black historical figures, such as Rosa Parks, Harriet Tubman, Martin Luther King, Jr. and Frederick Douglass?

I think about my dad growing up in the Jim Crow South and the stories that he shared with me. My dad is a hero of mine. Those other heroes are sort of like Black legacy heroes. We think about the thrill of skiing. We think about how much we enjoy it, the freedom. How we're going to navigate in a wonderful environment and the healthy things of being on the mountain. I wanted to bring them with me through my art. It's a tribute to them but also it's my way of visually bringing them with me to the mountain. After I had done a couple of those pieces, it dawned on me in Martin Luther King's final speech, literally the day before he was killed, he said: ‘I've been to the mountaintop.’ He used the mountain top as a metaphor for the place we want to arrive. And when we get to that place, we'll all be free. Then he says: ‘I've been there and I may not get there with you.’ It stunned me for a few minutes when I realized that in the middle of this collection — that's why I brought him along with me. As if to say: ‘We are there with you.’

"We have our parents and grandparents, those who have had to continue to build this place to where we are. Now we're realizing there's no door or place that we can't be. I think it's the power in what we see. That's what I hope I can add to the conversation."

Did you have any Black snowboarders to look to for representation of what was possible? Or were you in uncharted territory?

I didn't have any in the snowboarding world, it’s not something that brought me to the mountain. I went skiing with friends initially and I just had such a tunnel vision for the love of it. It just kept me coming back. I think what's important to understand, in regards to Black folks who come to the mountain, is that we're there to ski. Many times we are the only one or one of few. We love it that much that nothing else will interfere with it. We do experience some implicit bias, we experience some looks, we experience certain questions that come our way that make it very apparent that people are surprised to see us. That’s part of my narrative with the paintings. In the way someone can walk to this place [ski resorts] and often times not see anyone of color, walking into a gallery with my artwork, all you see are people of color. You’re experiencing something turned on its head, allowing others to experience, in a way, what skiers of color do.

Big picture: What are you hoping to accomplish through your art?

My initial feeling about my collection is: I’m celebrating the Blacks who ski. We're blessed to be there, blessed to have gone to a mountain for whatever reason, however we got there. We just want to share it. That is essentially the message I'm trying to send through my artwork ‘How about more of us come alongside?’ That's the thought. That's the goal. To increase the presence of Black and brown people in the mountains. The power of representation, which brings inclusion, which then can bring opportunity — so then we're all lifted up. (Read: "5 Black-Owned Restaurants to Support in Utah")

"That's the goal. To increase the presence of Black and brown people in the mountains. The power of representation, which brings inclusion, which then can bring opportunity — so then we're all lifted up."

My talk with Lamont Joseph White echoed the feelings I had when I first saw one of his paintings. I looked at the smile he’d painted on a girl sporting goggles and two afro-puffs and thought: “He understands me.” I felt heard and seen. I felt represented. The power of representation goes a long way towards altering our current thoughts of what is possible. (Read: "A Table for All: Feeding Utah's Culture")

While this may seem hyperbolic, I truly believe Lamont’s work is a step toward a better world. By changing who we tend to think or believe can be a skier or snowboarder, the artist is helping diversify and grow the sport. The more people he inspires to go outside, the more people care about the outdoors.

If we can get more people to care about the outdoors and the sports we love that take place there, the better our chances become in protecting wilderness and extending the longevity of our passions. (Read more on how to recreate responsibly, a shared ethic called Forever Mighty.) 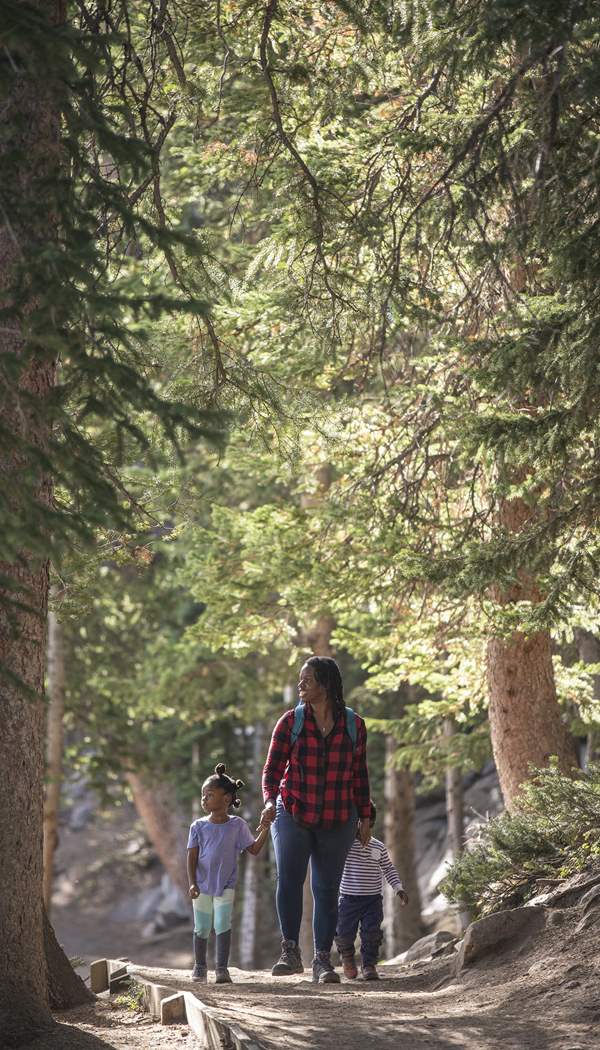 Founder of We Color Outside Nailah Blades shares how she works to empower others to find joy and confidence while exploring Utah’s outdoor spaces. 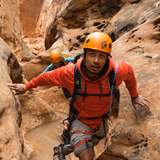 About the Author – Khai Johannes

You're here to ski. You've come to the right place. Aside from having The Greatest Snow on Earth®, what sets Utah apart from other skiing locations is the easy access. Of Utah's 15 resorts, 10 are within an hour of the Salt Lake City International Airport.