For movie buffs, this scenic tour of the state of Utah comes alive with nostalgia for Robert Redford’s iconic film, “Butch Cassidy and the Sundance Kid," and some of Butch Cassidy's real-life haunts.

Hours of driving: 12–16+ depending on side trips to Circleville or an off-road excursion to Robber's Roost.

He's one of the American West's most notorious outlaws. Though his fame is rooted in theft, his story has transcended the life of crime to became a legend with almost mythical underpinnings. The son of rural Utah pioneers of the Church of Jesus Christ of Latter-day Saints, that legend is Butch Cassidy. On this multiday road trip through Utah, wrap the Hollywood narrative into landmarks from the outlaw's life by exploring locations from both stories.

Many travelers visit southwestern Utah to see the soaring cliffs of Zion National Park and to hike, climb and mountain bike the incredible red rock landscapes. For movie buffs, this scenic corner of the state of Utah comes alive with nostalgia for Robert Redford’s iconic film, “Butch Cassidy and the Sundance Kid.” The complete list of filming locations includes the ghost town of Grafton, Snow Canyon State Park, the city of St. George and Zion National Park.

After exploring these Hollywood backdrops, you'll set off on one of Southern Utah's best road trips, the All-American Road: Scenic Byway 12. You'll steal glimpses of the red rock country that captivates modern travelers and at times shielded Butch Cassidy's Hole-in-the-Wall Gang from the law. Here's where you can add extra days to your itinerary. In other words, come for the chance to participate in Butch Cassidy's legend, but don't miss the opportunity to linger in some of America's most scenic and most adventurous parks and monuments.

While you could head back at this point, you're now close enough to Salt Lake City to consider seeing the legend kept alive in the present day. Rumor has it the Owl Bar, originally built in the 1890s, was moved from the town of Thermopolis, Wyoming, and had been visited by Butch Cassidy’s Hole-in-the-Wall Gang. Sundance founder Robert Redford played the Sundance Kid in the 1969 movie, and the Sundance Mountain Resort and Park City-based Sundance film festivals inherit the spirit of that film. 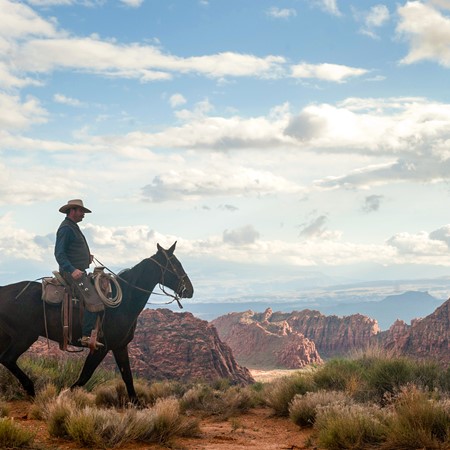 Activities and Overnight Options
It's just a couple of hours from McCarran International in Las Vegas to the St. George region of southwestern Utah. The soaring red rock cliffs, Mojave desert landscape and the profound sense of human and geologic history provided the perfect backdrop to "Butch Cassidy and the Sundance Kid," the movie star of this itinerary. Remember that famous chase scene from the film? Get on a horse and experience it for yourself with Patty Arnett at Snow Canyon Trail Rides or set out on foot across the park’s playful blend of petrified sand dunes and lava fields amid red rock walls and bright skies.

Nearby Grafton will also seem quite familiar (please visit respectfully) and from your base camp in St. George you can count on an array of great dining, overnight lodging, outdoor adventure and access to Zion National Park. If you haven't been to Zion, give yourself at least a couple of extra days, consider lodging or camping options near the park in Springdale and learn how best to visit the park here. 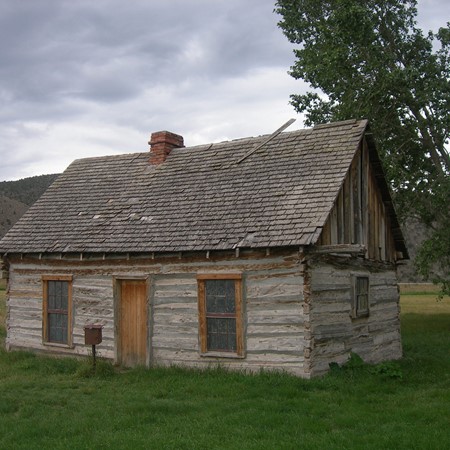 If you haven't used up all your allotted vacation time exploring the southwestern corner of Utah (between St. George, Cedar City and the Kanab area you could easily explore for days), it's time to get to know the man himself — not Paul Newman, but Robert Leroy Parker, the man who became known as Butch Cassidy. Scenic, high-elevation trail systems like Cassidy Trail in Red Canyon may well have been used by Cassidy and his Hole-in-the-Wall Gang to access remote hideouts along the Outlaw Trail. It might make sense: Cassidy's childhood home in Circleville was roughly 40 miles north, so the area may have held special meaning, besides being stunning to look at. Red Canyon mimics the famous hoodoos, or pillars, of red sandstone distinctive of nearby Bryce Canyon National Park. Circleville is a slight detour, either en route from yesterday or as shown on the map below between Day 3's exploration of Capitol Reef and the trip north toward Sundance Mountain Resort. Of course, between your proximity to Bryce Canyon today and the trip to Capitol Reef tomorrow, you have another important decision: Do I add days for "Exploring the Scenery" or keep the posse focused on its pursuit of Butch Cassidy's legend?

As teased above, this is a day (or days) to get acquainted with some of America's most renowned scenery along one of its best roads, the All-American Highway Scenic Byway 12. If you've never traveled it and have gotten as far as Cassidy Trail in Red Canyon, we highly recommend taking the time to finish the road. It's mere minutes to the turn to Bryce Canyon National Park. There's lodging and dining in Bryce Canyon City and nearby Tropic. And just a little farther is the turn at Cannonville to Kodachrome Basin State Park at one of multiple access routes into Grand Staircase-Escalante National Monument. Additional stops include the Escalante area, Boulder Mountain and Torrey, at the junction with yet another scenic byway, S.R. 24 in Capitol Reef Country. In short, give yourself time. (Self-sufficient and well-prepared travelers with an extra can take advantage of their proximity to Robber's Roost to explore remnants of a real outlaw hideout in the wilderness.) 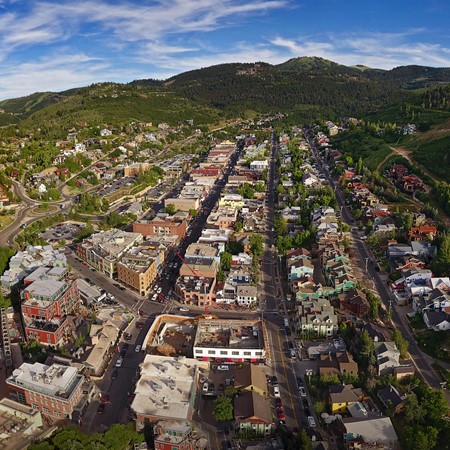 It's around three hours from the red rock landscapes and outlaw hideouts of Central Utah back to the metropolitan Wasatch Front. Depending on your departure time, you can make Sundance Mountain Resort for lunch or dinner at one of the renowned restaurants. An evening spent at the Owl Bar caps off the journey through the scenes and legends of Butch Cassidy. The restored Rosewood Bar is known to have once hosted Cassidy's Hole-in-the-Wall Gang at its original location in Wyoming. Another option for movie buffs and foodies is to continue up the highway to Park City. In January, Utah's famous mountain town hosts the Sundance Film Festival, but it's a year-round destination whether you're looking for trails and adventure or dining and culture. At the end of it all, it's less than an hour back to Salt Lake City International Airport, so there's no rush. (Of course, Butch Cassidy's footprints can be found all over the west, and really intrepid travelers might consider adding a couple of days to head east toward Vernal and Dinosaur National Monument and get directions to Browns Park, a remote and hidden on the Green River where none other than Butch Cassidy and the Sundance Kid used to hideout.