Utah's Outdoors Are Wide Open for All Abilities

Life-changing inspiration can be found in the heart of Summit County.

Views from the 6,000-foot elevation Bronfman Family Ranch and Education Center include the famous slopes of Park City Mountain Resort and Deer Valley Resort, and the sage-covered Round Valley recreation area, laced with mountain bike trails, paved cycling paths and nearby soccer and softball fields (Read: “Insider's Guide to Park City”). Adjacent to the fields is the Park City ice arena, home to the agency’s adaptive sled hockey team.

The lofty elevation gives the NAC decided advantages for its year-round outdoor activities. While it’s just 40 minutes from Salt Lake City, the elevation keeps temperatures at least 10 degrees cooler than the valley in the warm weather months and adds an additional two to three feet of snow during ski and snowboard season.

Cool summer mornings after an overnight rainfall offer the sweet, pungent fragrance of wet sage, while winter snowfall dusts the sage with a shimmering coat of white, turning mountain bike trails into white ribbons of fun for fat-tire snow bikes. The senses are filled in every season.

But the location is just the beginning. The real magic happens with the NAC’s adaptive outdoor programs.

Warm-weather programs range from horseback riding to river running, with every imaginable activity in between, such as mountain biking, water skiing, archery and rock climbing.

If one recreational activity sets apart the NAC from other adaptive providers, it would be the equestrian center.  The program offers adaptive horseback riding, hippotherapy, horse-assisted physical therapy and equine-assisted learning, which is effective with PTSD and other emotional challenges.

Horse and rider trot rhythmically around the perimeter of the indoor arena. On this day, I’m watching rider Penni Duzy, who is riding a golden Norwegian Fjord horse named Rebecca Dill. The Norwegian Fjord breed is short and sturdy, providing an accessible and stable ride. The ride appears natural and effortless, belying the concentration and practice that preceded it.

Penni is known as the miracle kid at the National Ability Center, for what she does but also for who she is. She was born with a hole in her diaphragm. “When she was born, the doctors prepared me for the fact that she wouldn’t be able to breathe,” says Karen Duzy, her mom. “I was devastated.”

Penni spent the first month of her life in the neonatal intensive care unit on a heart-and-lung machine. After that, her father Dave, a pediatric neuro trauma nurse, was the first to hold her. “Dave and I were both crying,” Karen recalls. “It was just so beautiful.”

The Duzys first enrolled Penni in the Crusaders camp, a multi-activity day camp for young people with intellectual disabilities, when she was 8 years old. At camp, Penni got towed on a raft behind a speedboat at Jordanelle Reservoir and tried horseback riding, among other activities.

On my visit, I watched Penni and Rebecca trot together for the first time since Penni’s back fusion surgery a year ago.

Penni’s putting Rebecca through her paces in the hushed environment of the indoor equestrian arena. The arena is bright, clean and spacious, with high ceilings and a pleasant earthy smell.

Horseback riding is Penni’s favorite activity at the NAC. After her lesson, she’ll move on to the archery range, another frequent stop. She spends at least two days a week at the center, where she’s well-known for her sweet spirit and positive attitude. “I’m just so grateful for the kindness and love that gets shown to my family,” says Dave, her father. (Read: "Spreading the Joy of Adaptive Recreation")

Penni also dismounted Rebecca on her own, another first, a carefully planned goal in her series of lessons. “Penni gets scared at times, but she perseveres and progresses steadily,” Karen says. “She’s amazing how she works through it.”

More progress in another activity: Penni recently traded her three-wheel trike for a two-wheel bike, which she rides with confidence. “She just feels so at home here,” Karen says. “It’s such a part of her life now that I honestly can’t imagine life without the NAC.”

From Arkansas to Park City, With Love

Arkansas native Josh Fohner, after being discharged from the Navy, headed from his home in Arkansas to Buena Vista, Colorado, to start the next chapter of his life. He was always up for another adventure.

On September 27, 2016, riding home from his morning workout on his bike, he was hit by a car. Josh suffered severe injuries from the impact, including a traumatic brain injury, broken neck and broken back.

He was life-flighted to Colorado Springs’ University of Colorado Medical Center and remained in the ICU for a month where he underwent a number of surgeries. Post-injury, Josh spent the first 15 months in a coma. He was able to open his eyes, make some noises with his vocal chords and make certain movements on command. Specialists call this process “emerging consciousness.”

Josh was given a very small chance of surviving. Yet always the fighter, he never gave up. While Josh still isn’t able to speak and is in a wheelchair without use of his arms, his legs and spirit are strong. He communicates with his foot — and a big smile.

Today, with his father, Mike, he’s pursuing a dream of cycling from the site of his injury in Colorado to his home in Arkansas. As part of that cycling dream, Josh and his father recently drove 1,800 miles from their home in Springdale, Arkansas, to Park City to take part in the NAC’s annual Veterans Summit Challenge Cycling Camp.

The camp is a five-day event that includes cycling, yoga, archery and a challenge course. About two dozen veterans attend the annual event, and while they stay together at the lodge, they share therapeutic outdoor activity and camaraderie.

For the Fohners, on their second trip to the Utah camp, they ended the week with the annual fundraising ride throughout Summit County. Cyclists can choose routes of one, sixteen, twenty-five, fifty, eighty or one hundred miles. Josh and Mike chose to do 25 miles with their veterans group.

Josh rides a Yumi, a custom four-wheel tandem recumbent bike made in Utah. He shares the bike with his dad. Yumi inventor Ben Crandall and his wife Melinda, a spinal cord injury and stroke survivor and big NAC fan, had introduced Mike and Josh Fohner to the center when the Crandalls first delivered the bike.

Within five minutes of Josh meeting Melinda Crandall, she became his biggest cheerleader. She was immediately in his face, telling him all of the things he’d be doing. As it turns out, the next day, Josh went water skiing at Jordanelle Reservoir and has since snow skied at Park City Mountain Resort.

Watching his son ride the Yumi in the 2019 Summit Challenge, Mike realized Josh was participating; he wasn’t just being taken on a ride (Read: “Adaptive Cycling in Colorful Cache Valley”). “He’s creating the wind in his face,” Mike says. “He’s part of this. That was a big leap forward.”

They’ll be back next year. Mike says it’s worth the two-day drive to share the camaraderie of the veterans camp while cycling throughout the area. “At the NAC, you have this amazing facility with all these things to do, you have all these incredible people you get to work with and you also meet a lot of wonderful people with their own stories,” Mike says. “It takes on an energy of its own.”  (Read: “Getting Back on the Mountain”)

"Watching his son ride...Mike realized Josh was participating; he wasn’t just being taken on a ride. 'He’s creating the wind in his face. He’s part of this. That was a big leap forward.'"

Going Up or Going Down: Gravity Sports Are for Adaptive Athletes

When you spend time in the mountains, gravity is a big deal.  Whether it’s skiing, mountain biking or rock climbing, all staple NAC activities, gravity is friend and foe — a challenge and a rush simultaneously.

For Ping Ping Cortez, that’s just fine. Ping Ping is a multi-sport athlete born with spina bifida, which saps the strength from her legs — but it hasn’t blocked her determination to be a competitive athlete.

Born in Northern China, she was abandoned on the streets, grew up in foster homes, and then, when she was 14, she was adopted by Kathy and Jerry Cortez and came to live in Utah.

They discovered the NAC through a friend, and now three years later, Ping Ping is a gonzo mountain biker and skier. “I like to go fast,” she says. Whether it’s snow or dirt makes no difference. Her mother Kathy says she’s a hot dog, "she does some crazy stuff."

Rock climbing is the ultimate challenge/reward activity. Each successful route going up builds confidence. “I didn’t know I could move my body up and down a mountain until I found the NAC,” Ping Ping says.

While she’s taking a break from rock climbing due to some pain issues, she’s still going up and down mountains on a recumbent mountain bike. In the winter, she’ll be joining the NAC’s development competition ski team with an eye towards the Paralympics.

When asked why mountain biking, climbing and skiing appeal to her, she says: “I like being up high, you can see everywhere.”

Fortuitously, the NAC is smack dab in the middle of Round Valley, which boasts more than 30 miles of high desert trails, which provide great views of the Park City area. Adaptive mountain bikers such as Ping Ping can gain confidence on the wide soft surface Hat Trick and Fast Pitch trails as they hone their skills and build endurance. The sense of accomplishment that comes from climbing to the top is rewarded by a roller coaster ride down.

Spreading the Joy of Adaptive Recreation 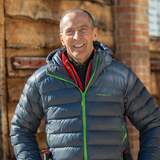