The Cedar Mesa area encompasses up to 1.9 million acres and is home to more than 100,000 archaeological sites. It is considered among the country’s most important indigenous cultural areas. The area's remote, rugged backcountry trails are not for everyone. But for adventurers with a love of solitude, archaeology and geographic beauty, this area has it all.

A great place to start your adventure is the serpentine Grand Gulch. Often called an “outdoor museum” because of its dense concentration of Ancestral Puebloans’ ruins and rock art, Cedar Mesa's Grand Gulch is a destination that offers many opportunities for recreation, exploration and discovery. As a whole, the Grand Gulch Primitive Area sprawls over 37,580 acres of canyons and mesas. And Grand Gulch can be accessed via a number of trailheads, most of which are located off S.R. 261.

Most ruins are 800 to 1,200 years old. Around every corner in Grand Gulch and its adjoining canyons, you will see the real dwellings, buildings, tools, pottery, art and other signs of civilization left behind by the acients. The canyon is thought to have been one of the most densely populated areas before colonization in North America. It is surmised that a several-decades-long drought at the end of this period made those who called Grand Gulch home head for more precipitous environs, leaving the ruins behind.

A favorite route into the canyon is Kane Gulch. While it is not the shortest approach, it is one of the most scenic routes, as you enter into the high-cliffed gulch within a mile of the trailhead. This hike can be accomplished as a long, in-and-out day trip, or looped with the Todie Canyon section for an overnight backpacking experience. Other popular side canyons include Bullet, Coyote, and Sheik.

The 52-mile Gulch is unlike anything else in Utah in its abundance of ruins and artifacts. Aside from this, as it’s been previously noted, it is a significantly beautiful canyon. Envelop yourself in the tall walls colored with desert varnish as you meander around juniper, pinyon, and cottonwood trees.

There are a number of ways to explore the Gulch via different entrances and exits, and one could ostensibly even go the same route a dozen times and find news things on each return trip.

In particular, the Kane Gulch access is a mighty rock fortress and pales the other inlets by comparison. If a day-trip is desired, it’s totally doable to reach the intersection of Kane and Grand Gulches, where you’ll be able to tour Junction Ruin before continuing on to Turkey Pen Ruin and farther, if so you desire. To Turkey Pen Ruin from Kane Gulch Trailhead and back is a 9.3 mile day hike.

The Bears Ears buttes that are the namesake for Bears Ears National Monument are famous in San Juan County, for their cultural and geological significance. The pair of towering buttes are bordered by Dark Canyon Wilderness and Beef Basin on the west, Comb Ridge on the east, and Indian Creek/Canyonlands National Park to the north.

The region is extremely popular with climbers and other outdoor lovers for its red rock canyons, high alpine peaks, and tree-covered plateaus where wildlife flourishes. Most of the terrain around Bears Ears buttes is easy to access by vehicle, though aspiring hikers and climbers will have a wealth of land to explore if they wish to seek out some of the more remote areas of the plateau.

Permits and fees are currently required for several hikes in Cedar Mesa. Some permits are payable at the trailheads, others must be obtained from BLM field offices. Many of the dirt roads in this area are impassable when wet, snowy or muddy. Check at the visitor center or the ranger station before traveling into the backcountry. Permits are available at most trailheads and overnight permits are available at the Kane Gulch Ranger Station — be sure to pick up a map while you’re there. Beginning in March 2018, advance reservations may be obtained on Recreation.gov. Please visit the BLM Cedar Mesa Permits webpage for more information.

The Kane Gulch Ranger Station is located along Utah Highway 261 about four miles south of Highway 95, not far from Natural Bridges National Monument

Visitors traveling to the areas surrounding of Bears Ears National Monument should be aware that the designation of monument status has not allowed for the United States Forest Service and Bureau of Land Management to develop their management plan, nor create new services or facilities. 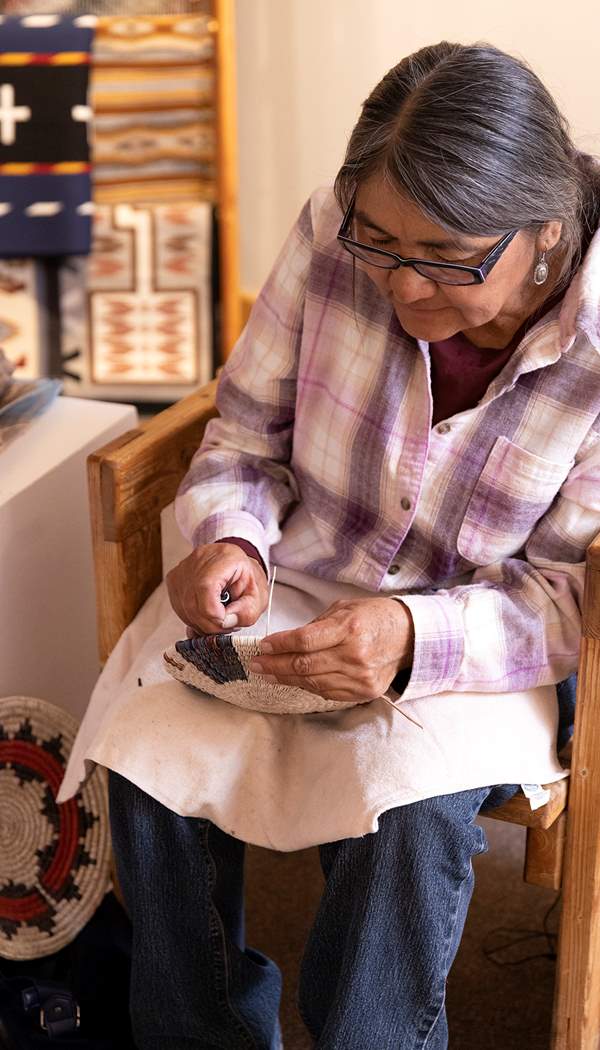 “I learned how to weave from my mother…I use a lot of colors, and the colors that I see are the ones on the reservation sunset.”